For last month that resulted in Excalibur #14, Witchblade / Silver Surfer: Devils Reign, and Justice League Europe #8. To read the bullet reviews of each, click through to the next page here. 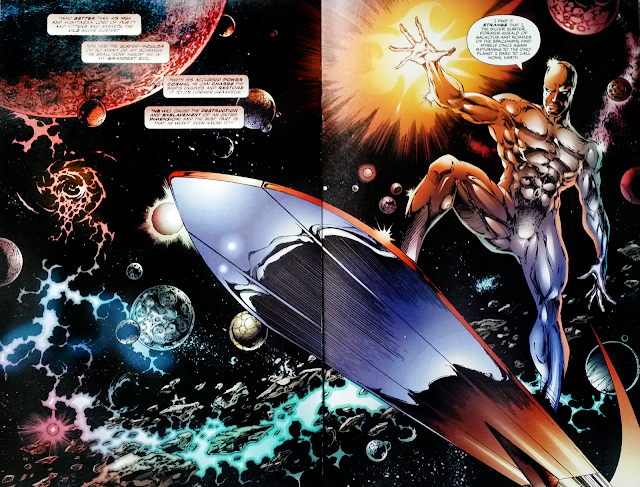 JUSTICE LEAGUE EUROPE #8 Even though I only gained this, the final chapter of The Teasdale Imperative now, the other chapters already had the tale sitting as one of my favourite Justice League adventures.

It had everything - a foriegn location, swarms of crazy zombie-ish people, the Spectre, a new Doctor Fate, and the great line-ups and interactions of the American and European League's, written by Keith Giffen and J.M. DeMatteis. What's more the J.L.E. chapters had the added bonus of Bart Sears' art - especially with his STILL unbeaten takes on Martian Manhunter and Captain Atom. Art like this:

The downside is, after owning all the other chapters for over a decade, I had already pictured the final conclusion. An epic battle royale with the likes of Power Girl and Fire pushed to their limits. What stands in its place (without spoilers), is he JLA version of those Fantastic Four issues where Reed Richards creates a last minute invention to save the day, while his teammates look on. Cool? Moderately. Worthy of the dream? Moderatly not. Rating: *****


SILVER SURFER WITCHBLADE WIZARD 1/2 Can any Silver Surfer fan turn down a chance to see Norrin Radd illustrated by the crew at Top Cow Studios? Answer, you can't. As the splashie above shows, it's a pretty unbeatable thing.

The catch with this comic (like all 1/2 issues), is that you have to entice the readers into picking up the rest of the crossover, without giving away any plot pieces that readers of the main series won't miss if they don't stumble across the limited edition ashcan. That means the action is pretty light.

Bored of the modern ages, Mephisto discovers a new dimension upon which he aims to create his biggest masterpiece in evil, that of the Witchblade. To power his dimensional jump, he needs to trick his arch-rival, the Silver Surfer into unleashing his 'power cosmic'. While his sidekick is a bit to camp and the dialouge swings from greatness to cheese at a moments notice, it and the Surfer does the job it's intended to do. Rating: *****

EXCALIBUR #14 In contrast to the Justice League Europe review above, the final chapter of Excalibur's Cross Time Caper has everything a good comic needs. On top of this, while it is a conclusion, it reads perfectly as a stand-alone issue. Funny that.

Trying to get back to their earth, Excalibur crashland in an alternate Spy vs Spy -ish reality, created by the Impossible Man. Captain America and Deathlok are one, bowlhead Mysterio gives Meggan and Nightcrawler fashion advice, and just when it seems everyone is intent on killing each other, Galactus shows up to eat the planet. Mmm tasty.

The riches of this issue are endless. Rick Jones is desperate to be a sidekick again, the que for Mr Fantastic's help is around the block and the best Giant Man scene you'll read outside of Marvels, ends with Namor. Best of all, writer Chris Claremont and artist Alan Davis still keep the development of Captain Britain, Shadowcat and co. moving forward, reminding me with every page why I loved this team - in both senses of the word. Rating: *****