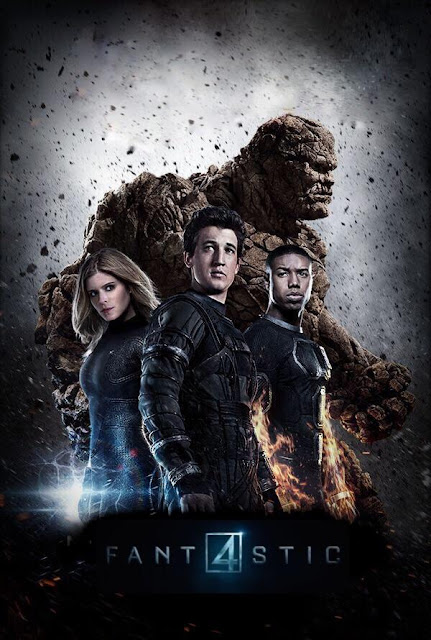 "Look at me. I'm not your friend. You turned me into something else."

That quote is symbolic for this film.

Why? It's the border within Fantastic 4 where everything amazing that preceded these words is swapped out for something goofier than a Disney special. See this movie isn't all that bad - just on this project, Fox has decided to be the world's newest Mickey Mouse outfit.

Now a reboot of Marvel's first family, with a younger, controversial cast and a re-tweaked origin was always going to be hit hard by fan reviews. Having read many of those myself prior, I prepared to have my fav Marvel team shat on in a bazillion ways.

However as I sat in the theatre, my reaction was anything but. Had I walked out when my opening quote was spoken, this review would be a straight 4.5 Jaffa, filled with words like 'amazing', 'inspired' and 'hot'. But I didn't and as a result, doom came.

Opening with the origins of the Ben Grimm (Jamie Bell) / Reed Richards (Miles Teller) friendship makes a lot of sense. As Reed's teleportation obsession grows from school science project to actual dimension shatterer, his passion makes for a logical catalyst for the tragic events ahead.

Brought into the brain trust that is the Baxter Foundation, Reed quickly allies himself with pattern decipherer Susan Storm (Kate Mara), political savant Victor Von Doom (Toby Kebbell) and Sue's overlooked hothead brother Johnny Storm (F.Y.I., not only is actor Michael B Jordan perfect as Johnny, his flame covered body out SFX's The Thing - it is incredible)!

Deciding to be the 'Lance Armstrong' not the 'unrecognised scientist' whose dream he made his fame on, the boys decide to stop NASA from stealing their acclaim of being the first humans to step into their discovered dimension, by doing it themselves.

Confident greatness is seconds from his grasp, Reed calls in Ben to be part of the cross-dimensional road trip. Alongside the childhood best mates, Johnny and Victor touch down on the alien terra firma, only for nature to counter their renegade spirits.

Back on earth, Sue sees the chaos unfolding and desperately tries to save her teammates, yanking them back through the dimensional doorway. Only the violent energies of the alternate universe follow suit, exploding through the Baxter Foundation, and turning our heroes into something not of this world, and that status quickly mutates into the government's new favourite lab rats.

Unable to stand the guilt over his actions, especially as they relate to Ben, now the rock-skinned Thing,, Reed brakes free of his captors to find a cure. While his efforts never really get followed up on, seeing the government dispatch a hostile Thing to bring in Mr Fantastic is a truly sweet moment. And then there's the quote that changes everything.

Suddenly we get an overpowered Dr Doom, no 'Thing bomb' like in the movie's trailer, bizarreness, cheesiness and more.

In short, it gets Elektra / Iron Man 3 level worse. The final meeting of the surviving heroes with their former military captors, their new headquarters, Fox's obvious attempts to establish a S.H.I.E.L.D., the sole (and suddenly remembered) banter between the Torch and the Thing, plus the CRINGEWORTHY creation of the team's name had me trying to keep my stomach and disbelief down until the 'credits' finally rolled.

Now rumours swirl that director Josh Trank was locked out of the editing phase, three of his big action scenes were stripped from the film and the ending was completely different to what the studio had agreed he would create. And that there in shows who is at fault.

Sure Fox coughed up the dinero, but when you've already approved the director's vision, tampering on this scale isn't fair to the talent involved, or to the audiences paying hard earned money to see the results.

The first chunk of this film perfectly responded to the heavy bullying this film suffered prior to its release. Having the biggest bully then be the one that signed the initial cheque, well like The Thing says, that's "something else".