SWEET AS: The Top 6 From DC Comics' November 2015 Solicitations 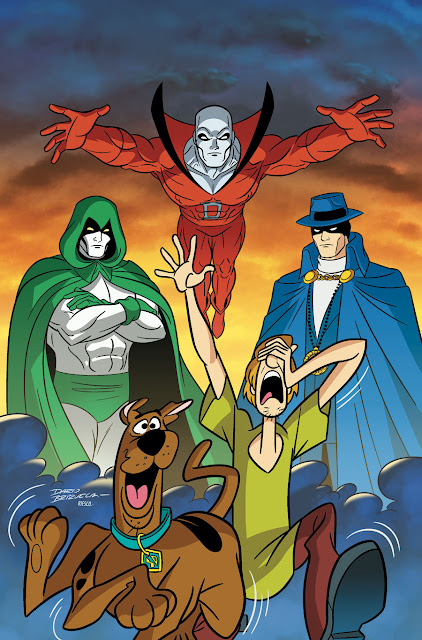 When we Kiwis find something we like, we say it's 'Sweet as'. When I look at DC Comics' November 2015 solicits, these six make the 'Sweet As' grade:

SOUNDS LIKE AWESOME   SCOOBY-DOO TEAM-UP #13 There’s nothing unusual about ghosts disappearing—but if other ghosts don’t know what happened to them, there’s a mystery afoot! When the Phantom Stranger recruits Scooby and the gang to follow a trail of clues, things get even stranger—like seeing an unexpectedly brave Shaggy leaping acrobatically into the fray (mainly because he’s possessed by the hero known as Deadman)! (W) Sholly Fisch (A) Dario Brizuela

JUSTICE LEAGUE #46 Darkseid War! The Justice League has become Gods! Grail discovers a truth about Wonder Woman that disturbs even her! A shocking secret about the fate of the Anti-Monitor will force the League to seek out unlikely allies! (W) Geoff Johns (A) Francis Manapul

MIDNIGHTER #6 Midnighter’s always lived his life believing nothing could ever hurt him—but that was before he let someone he cared about into his world! When a mysterious enemy targets the family of the man he loves, all bets are off... (W) Steve Orlando (A) ACO

SUPERMAN #46 Robbed of his identity, his loved ones and his home, a broken Superman is forced to join a super-fight club. The stakes? His life! (W) Gene Luen Yang (A) Howard Porter

JUMP ON HERE  TITANS HUNT #2 “The Secret History of the Teen Titans” continues! Dick Grayson is hot on the trail of a young Atlantean named Garth—but what he doesn’t realize is that something is hunting him! Plus, Roy Harper encounters a mysterious woman named Lilith—and this run-in will leave him questioning his own past! (W) Dan Abnett (A) Paulo Siqueira

What do you think?  For DC's full November solicits, click here.
Posted by IADW at 9:53 pm