SWEET AS: The Top 6 From Marvel's November 2015 Solicitations

When we Kiwis find something we like, we say it's 'Sweet as'. When I look at Marvel Comics' November 2015 solicits, these six make the 'Sweet As' grade:

PICK OF THE MONTH:  HERCULES #1 The world's first super hero decides it's time to get back in the game, protect the innocent, defend the world, and generally remind everyone why he set the mark for heroism in the first place. Make way... Hercules is back!

The greatest son of Olympus is thrown into the fight against threats ancient and modern. A modern world, an age-old hero... and blockbuster action! (W) Dan Abnett (A) Luke Ross

SOUNDS LIKE AWESOME  BLACK KNIGHT #1 What do you do when it's your destiny to be damned? For centuries, that question has plagued each wielder of the Ebony Blade... with all of them meeting untimely ends due to the sword's curse.

And it is the question the current Black Knight, Dane Whitman, must ask himself as his addiction to the blade grows ever stronger and he finds himself in Weirdworld. What circumstances brought him to this strange and dangerous realm? And what do the Uncanny Avengers have to do with it? Find out in this new ongoing tale of sword, sorcery and one man's struggle to save his soul. (W) Frank Tieri (A) Luca Pizzari

JUMP ON HERE  ALL-NEW, ALL-DIFFERENT AVENGERS #1 The Avengers are dead -- -long live the Avengers! Earth's Mightiest Heroes -- Captain America, Thor, Vision, and Iron Man -- are living separate lives, not tied to any team--but when a threat from beyond the stars targets our world, fate draws them together once more, alongside Nova, Ms. Marvel, and Miles Morales a.k.a. Spider-Man! (W) Mark Waid, (A) Adam Kubert and Mahmud Asrar

DOCTOR STRANGE #2 Take a tour of Doctor Strange's home-- the Sancto Sanctorum. It's the weirdest and most dangerous place in the Marvel Universe! A place where opening the wrong door can unleash hell on Earth. Unfortunately for you and your fellow visitor, Zelma, Strange's house is infested with something far worse than bed bugs! (W) Jason Aaron (A) Chris Bachalo 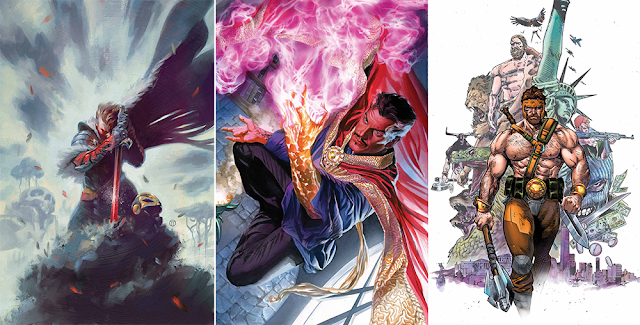 INVINCIBLE IRON MAN #3 Tony is chasing the evil Madame Masque as her actions threaten to rip all of reality apart! But it is WHO Tony is teaming up with to do this that will have everyone talking. And a real good look at exactly what Iron Man's new armor does...and it is something! (W) Brian Michael Bendis (A) David Marquez

AMAZING SPIDER-MAN #3 More of Spider-Man's post-Secret Wars world revealed! Visit Parker Industries New York Headquarters, the building formerly known as the Baxter Building! The Human Torch is going to have something to say about that! (W) Dan Slott (A) Giuseppe Camuncoli

What do you think?  Full Marvel's November 2015 solicitations here.
Posted by IADW at 11:00 am