UNBEARABLE DARKNESS OF BEING: Black Knight Gets Own Sword and Sorcery Series At The Cost Of Sanity 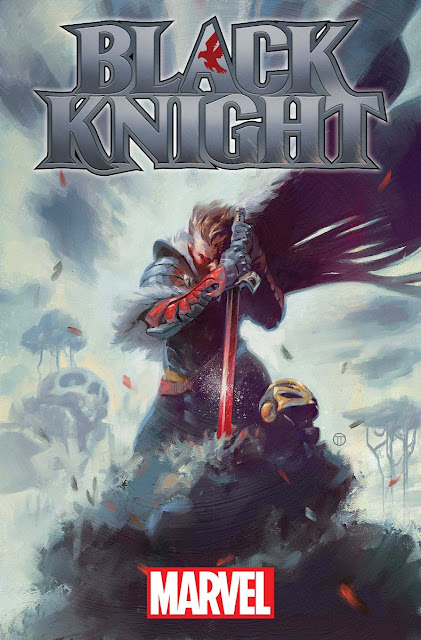 Man, it's like someone at Marvel is re-reading 90's Avengers comics and realising how great they were.

Not only is 90's Avenger Hercules getting his own series, Dane Whitman, The Black Knight has just had the same kudos given to him - which is long overdue, especially as he was the 90's team's flagship character.

Dane's sole weapon of fate is the ebony blade, one of the most powerful devices in the MCU. Crafted from a meteor by Merlin, it has driven mad all its 'welders', except Dane.

He feels it is his responsibility to battle the blade's influence, in order to prevent others from sharing the fate of his predecessors. And battle he does. The fight to retain his sanity isn't a Whitman win by a landslide, it's literally resting on a knife-edge according to series writer Frank Tieri on Newsarama.

Left on the Secret Wars setting of Weird World, due to an event that includes Steve Rogers and the Uncanny Avengers, the former member of Ultraforce (from the much missed Ultraverse line of comics), MI:13, Heroes for Hire, The Defenders and more must embrace his new sword and sorcery environment in order to survive.

"I think Dane is an underappreciated character and has been for a long time and hopefully this series fixes that," Tieri tells Newsarama. "What if the Ebony Blade was not the only object of its kind? What if there were other artifacts that came from that meteor that Merlin carved the Blade from? And for that matter…where the hell did that damned meteor come from in the first place?"

This new series (drawn by Luca Pizzari) may seem like an outside choice for lead character, but that's just what mainstream comics needs more of in my opinion. There are so many awesome characters in those back seats, it is time more of them were driven to the front by creators who love them as much as Tieri obviously loves Dane (Darkhawk or Sleepwalker anyone?)