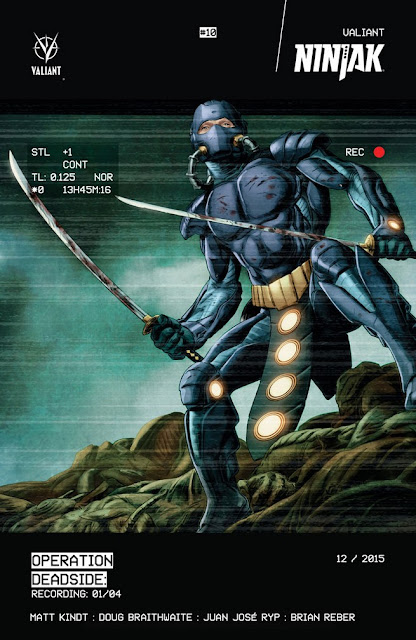 It was really hard when Valiant stopped both Harbinger and Shadowman.

While Harbinger was soon followed by Imperium, which follows the madness of Toyo Harada (which will no doubt lead back into a new Harbinger #1), that break eased the foot off a gass pedal which had otherwise been foot-to-the-floor on a monthly basis.

Hardest hit were us Shadowman fans, as the sensational work of writer Peter Milligan, came to an end in the 2014 mini series ShadowMan: End Times, where the hero killed his father and eventually became slave to arch-enemy Master Darque, lost in the Deadside dimension.

Then nothing (commence fan screaming).

Now reaccelarating with a distinct new vision, comes word that Jack Boniface - Shadowman (one of the companies most profitable franchises in its previous incarnations), is on his way back, starting in Ninjak's next story-arc Operation Deadside.

A four part sci-fi tale that sees the ultimate martial artist (and magig non-beliver) venture into the supernatural / voodoo relm where the Shadowman and the evil spirit loa within him that he struggles to control was lost, to find weapons and a covert military team also AWOL in the same darkened abyss.

With the Shadowman's edgy occult oracle, Punk Mambo at his MI-6 side, the Valiant team tells Entertainment Weekly the arc will start in December's Ninjak #10, by writer Matt Kindt and artist Doug Braithwaite, with each issue of the survival story upping the spook factor with glow in the dark covers.