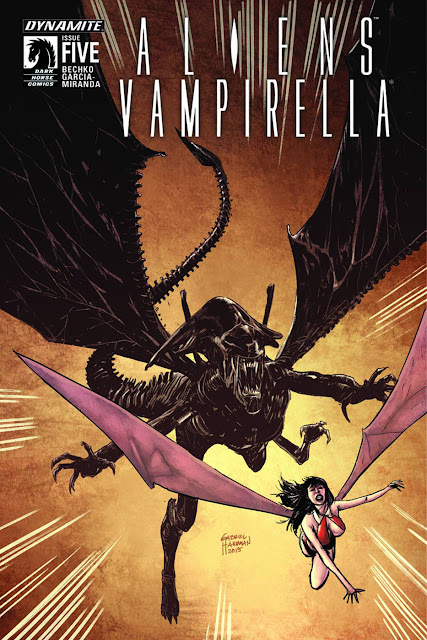 When we Kiwis find something we like, we say it's 'Sweet as'. When I look at BOOM!, Valiant, Dynamite, Dark Horse and IDW's January 2016 solicits, these six make the 'Sweet As' grade:

PICK OF THE MONTH   BLOODSHOT REBORN #10 Valiant "The Analog Man," part one. Many years from now, Los Angeles has become a post-apocalyptic wasteland and the once unstoppable killing machine known as Bloodshot has become The Analog Man.

Hopelessly outdated, Bloodshot's taken on a new role as the protector of a small town, eking out a subsistence existence with the great love of his life -- Magic -- and protecting a group of stragglers who've weathered the storm. But when a gang of marauders arrives, the settlement's survival is threatened, and Bloodshot is forced to bring justice to the distorted and disjointed badlands of the Valiant Universe! (W) Jeff Lemire (A) Lewis Larosa.

SOUNDS LIKE AWESOME  ALIENS / VAMPIRELLA #5 Dynamite The death toll mounts, and the fate of the Xenomorph that hatched from within Vampirella stands revealed! Meanwhile, the Martian Base pays the price for its mistrust of Vampirella as she and Lars deal with a horrifying threat that predates human history. (W) Corinna Bechko (A) Javier GarcÃ­a-Miranda

JUDGE DREDD #2 (IDW) Mega-City Zero, Pt 2! As Dredd continues to unravel the mystery of what has become of Mega-City One, he encounters a community devoid of law and order. (W) Ulises Farinas, Erick Freitas (A), Dan McDaid

KLAUS #3 (of 6) BOOM Klaus is caught delivering presents to the town’s children and must fight his way past Lord Magnus’s guards to avoid imprisonment. (W) Grant Morrison (A) Dan Mora 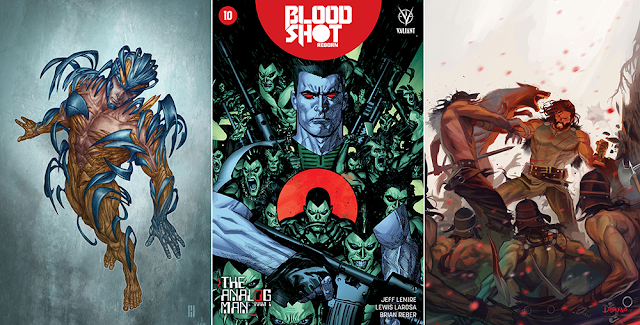 CONAN THE AVENGER #22 He’s been defeated, crucified, and left to die in the desert— now, Conan must prove his worth among the hostile Zuagir tribesmen. In his mission to retake the city from a traitorous queen, is the cruel Zuagir chieftain friend or foe? (W) Fred Van Lente (A), Brian Ching

JUMP ON HERE  X-O MANOWAR #43 Valiant New arc! "The Kill List," part 1. With two kingdoms now under his command, Aric of Dacia's adopted nation, America has given him a new mission: destroy the Vine's network of humanoid alien agents once and for all. To do it, he'll have to turn to the one man among us he can trust...his own former enemy; Ninjak! Meanwhile, the Vine's most militant warrior, Commander Trill, is readying a counterattack...and what happens next will shake the Valiant Universe to its core. (W) Robert Venditti (A) Rafa Sandoval