THE COMICS' BEAT: Human Torch In The Dead Milkmen's "If You Love Somebody, Set Them on Fire" 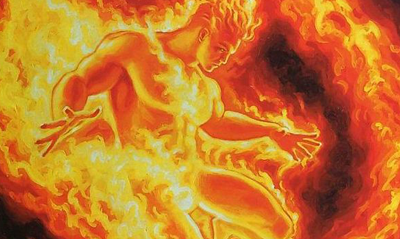 Mondays. They are worse than Dr Doom and after a heavy one, it can be a little hard to get the drum pumping again for the week ahead. In The Comics' Beat, I chuck up a musical hit saluting comics' best.

This week, because having no monthly Fantastic Four comic is a pretty harsh cardinal sin, so I wanted to track down a number starring the team's resident hothead, Johnny Storm.

For the album Metaphysical Graffiti, the Dead Milkmen offer such a ditty with  the aptly named If You Love Somebody, Set Them on Fire.

"Your dad called me the Human Torch"