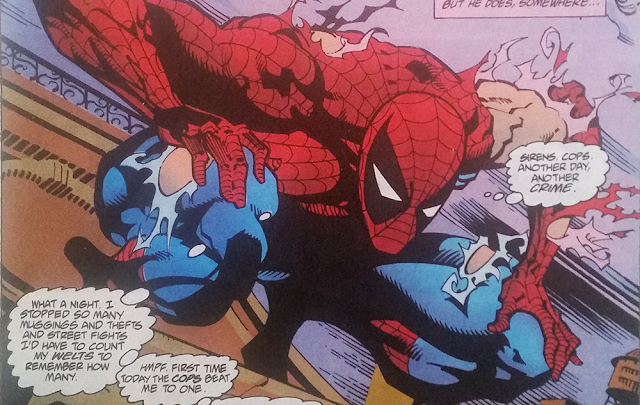 Ann Nocenti is one of my all-time favourite writers thanks to her run on Daredevil, and in those pages, her creation of nutjob villainess, Typhoid Mary. When she and Mary jumped across for a two issue tale of sexism in the pages of Spectacular Spider-Man, I knew things were going to get good fast.

Watching Spider-Man and Peter Parker interacting unknowingly with all sides of the pyrokinetic, schizophrenic feminist killer not only lived up to my dreams, it blindsided me from realising that Joe Madureira drew the cover to #213 until years later! What cover? Well you'll find that by clicking through to the very next page. 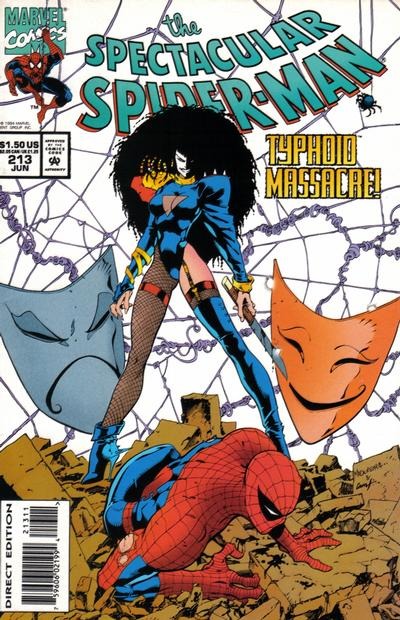 See? Worth the jump huh!

Ann starts her tale of controversy with a worn out Spidey, who has literally been on the go all night. Arriving at a horrific murder scene, he quickly changes into Peter Parker to take a few quick snaps, and finds one thing out of place in the room - a horrified witness named Mary.

As police joke that no woman could've ever killed the abuser lying dead on the floor, Peter feels sympathy for the Mary's distress and offers her Mary Jane's number as a shoulder to call on.

While Peter himself neglects his wife to chase the killer at large, Mary soon discovers things within her bag that jolt her transformation into Typhoid, a telekinetic vixen that loves the attention of men, and she too sets out on the town.

While interior artist, James Fry perfectly captures the body language and atmosphere of each Mary and the New York streets, it is Typhoid's "girl-to-girl" talk with spider-wife, Mary Jane that steals the show.

Sadly Typhoid's thought-provoking attacks on M.J's marriage don't run as long as they could, and after their inevitable explosion, both Pete and his wife are left fearing what Typhoid will do to Mary, if she finds her.

As Spidey begins to trace the fleeing Typhoid, he witnesses her transformation into the killer of men, Bloody Mary. Quickly eluding the blows and kicks of the wall-crawler, the pyrokinetic assasin escapes, leaving her full craziness to finally dawn on Mr Parker.

In an issue filled of pokes at modern male/female stereotypes, one question rises above all else. Has the crazed rouge gone on to attack another abuser of women, or back to settle a score with the wife of the man who just assaulted her, Mary Jane?
Posted by IADW at 9:06 pm