I HAVE THE POWER! 'Fall of Grayskull' Re-Breathes Life Into Eternia

If someone had told me that $12,000 would get me a live-action Tri-Klops, I would've invented a Kickstarter program for Game-Boy in the 80's to get one.

Director Daniel Benedict took that princely sum (raised on Kickstarter), to create this live-action tale of a Teela racing to accept her destiny, in time to save He-Man (pro-wrestler Brian Cage) from the clutches of Skeletor, Evil-Lyn and yes, Tri-Klops. Mer-Men and Ladies; Fall of Grayskull. 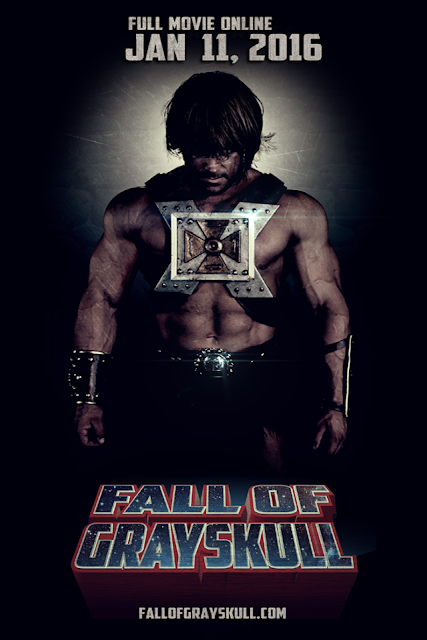 The fan-love involved and the costuming is brilliant. Perfectly faithful to the original action figures, yet brandishing many modern touches, just look at Evil-Lyn’s sinister make-up and headpiece, they are perfect.

While the fantastic plot angles of Teela's self-confidence and grief over the death of her mother sadly seem to be left behind (hopefully for a sequel), so that He-Man and Skeletor can battle it out, I realise that Masters of the Universe has owned the imaginations of these fans and I for over thirty years!

Right from the narrator opening this tale, I'm transported back to the MOTU read-a-long book and tape sets I used to lay on the bed and play as a kid - his voice sounds identical!

So, click play already and give it a watch. Then flip over to the team's Facebook page or website to read the prequel comic and let them know what you thought of their amazing hard work!
Posted by IADW at 9:44 pm