THE TOP 12 OTHER SUPER-HERO TEAMS IN COMICS: 12 - Harbinger's Renegades (Valiant)

Every fortnight I'll look at another of my Top 12 Other Super-Hero Teams, and why they're just as good (if not better) than those that hog the sales charts and hearts of fans everywhere. Today, the Renegades from Valiant's Harbinger! 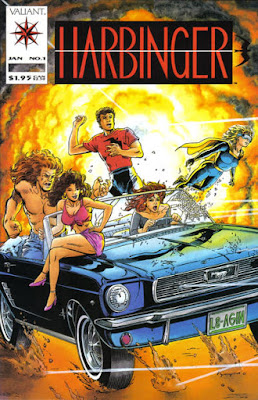 WHY THEY'RE COOL: When these super-powered 'Harbinger' teenagers screw up, they don't just blow up buildings, they blow-up lives in the hopes of survival, in ways no 'mutant' ever could. Peter Stanchek is one of the most powerful beings alive. His only rival, the older and slightly more powerful Toyo Harada, mixes his political and corporate clout with his own Harbinger abilities, in order to capture and convert Pete to his world view, or eliminate the threat of his rogue existence.

As Toyo amasses an army to help him achieve that goal, Pete's cross-country dash for freedom, brings him into the path of other Harbingers who join his dash to survive, such as the fiery Flamingo and moral compass, Faith. This generation gap gets deadlier with every step, and it's only just beginning.

STAR PLAYER: Solid hologram projector, Torque, puts a great spin on a Billy Batson / Captain Marvel-ish dynamic. While he lives as Torque he's the party animal all girls (and some guys) want to hang with. Depowered, he's John Torkelson, a shy guy from Northern Georgia with some outdated ideas and the world crashing at his door. Battling for a reason to revert to John at all sometimes, this powerhouse dreams of being all Torque and waaay more action.

RECOMMENDED READING: While anything written by Joshua Dysart is worth way more than the price sticker, Death of a Renegade has to be the crown jewel. With Project Rising Spirit and the Harbinger Foundation on their tail, the Renegades realise their hopes of outrunning Toyo were foolish and try to turn the tables. Try. It's not called Death of a Renegade for nothing.
Posted by IADW at 7:10 pm