SWEET AS: The Top 6 From DC Comics' May 2016 Solicitations

When we Kiwis find something we like, we say it's 'Sweet as'. When I look at DC Comics' May 2016 solicits, these six make the 'Sweet As' grade:

PICK OF THE MONTH  SCOOBY-DOO TEAM-UP #16 Shazam and his crime-fighting companions are missing! It's up to Tawky Tawny to call in experienced monster-hunters Scooby and the gang...because the kidnappers are the Monster Society of Evil! (W) Sholly Fisch (A) Dario Brizuela (You've got to admit, this is way more cooler than the modernised Jim Lee Scooby Doo launching in May! - Dan)

MIDNIGHTER #12 Midnighter, Apollo and the Suicide Squad square off against The Unified -- one of Henry Bendix's most dangerous creations! Is their combined strength enough to stop a being as powerful as Superman and as intelligent as Midnighter? (W) Steve Orlando (A) ACO

SWAMP THING #5 Alec Holland journeys to Nanda Parbat to seek a way to fix the chaos he has unleashed by wishing for his humanity back. But will it be too little, too late? With a guest appearance by Deadman! (W) Len Wein (A) Kelley Jones

JUSTICE LEAGUE #51 It's a brave new world in the devastation that follows "Darkseid War." (W) Geoff Johns (A) Paul Pelletier and Tony Kordos.

NEW GODS WATCH  SUPERMAN: THE COMING OF THE SUPERMEN #4 Fry, Superman, fry! The battle between Kalibak and Superman rages on as the denizens of Apokolips cheer. And Darkseid's homeworld unleashes a weapon that will permanently transmute the terran solar system! (W and A) Neal Adams.

SOUNDS LIKE AWESOME  DEATHSTROKE #18 After a bitter betrayal by a trusted comrade, Slade Wilson finds reluctant allies in his estranged children, Rose and Jericho. But as an all out battle looms, he must also join forces with the one and only Ra's al Ghul...who may have his own hidden agenda. Could this uneasy family reunion spell doom for Deathstroke? (W) James Bonny (A) Tyler Kirkham. 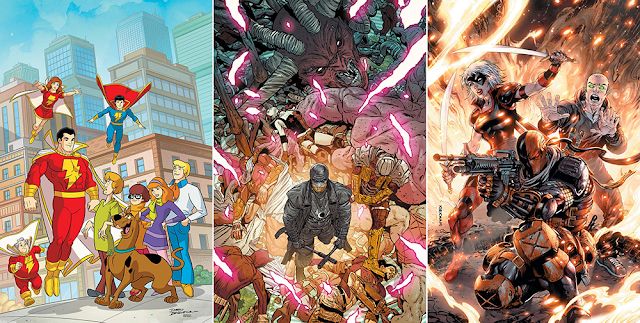 What do you think?  For DC's full May solicits, click here.
Posted by IADW at 5:23 pm