FACE-OFF: The Top 6 Elektra Artists Ever (Up Until Now)

Netflix's Daredevil season 2 is a global hit due to Elektra stealing the limelight with a quick sai thrust into her foe and perhaps a roundhouse kick to the throat for good measure.

Having set fans hearts on fire since her 80's arrival, she may have never worn the shoulder pads and big hair dos of her era (that was Typhoid Mary's job), but she's outlasted many that did, secured multiple solo series', a 'real world' modelling job and multiple video game roles (yes, I'm leaving that *cough* movie out)!

To celebrate her latest success, here The Top 6 Elektra Artists Ever (up until now) (click to enlarge)!

6) JAY ANACLETO Forget Wonder Woman - only one greek amazon went all-white and looked just as good if not better than when in her iconic red suit, and that's Elektra. Here her swords are half as lethal as her stare!

5) FRANK MILLER I'm going to get shot for this, but I think Frank only got a grip on drawing his own creation from Elektra Lives Again onwards. His take became more cultured, stylised and gritty - just like Elektra herself.

4) JULIAN TEDESCO Julian's Thunderbolts covers shot of the shelf, boosted by the insane way he gave Elektra a model's physique but still kept her lethal and deadly. Just Google his name and hers for a bloodsoaked face you won't forget!

As for the top three artists, well you're just going to have to click here for those...
3) MIKE DEODATO Boy I had this image on everything for years. Done as an inhouse advert artwork for his Elektra series at the time, it is easily the first image I think of, whenever I hear Elektra's name. 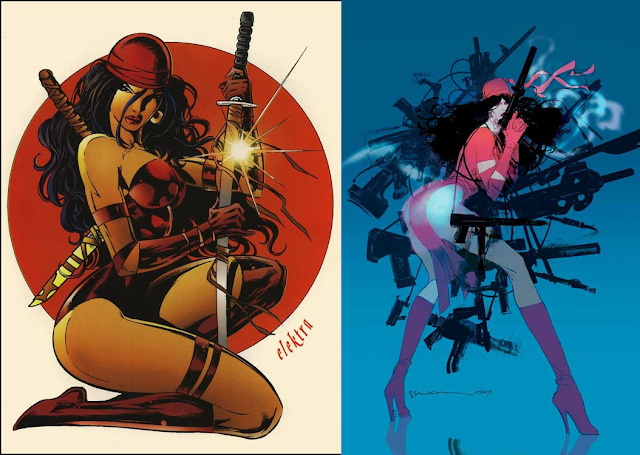 2) BILL SIENKIEWICZ Having recently returned to comics #1 femme fatale and proven he is as good as when he left, Bill was one of the first artists to elevate comics into fine art, and he used one of its finest women to do it.

1) LEINIL FRANCIS YU  In the dark surrounded by Hand ninjas or in the light surrounded by.... well.... hand ninjas, no one compares to Leinil's take on Elektra. It's like Phil Noto, Jae Lee and Mike Mignola had a little art baby right there on the page, and it brings a tear to my eye just to see it. 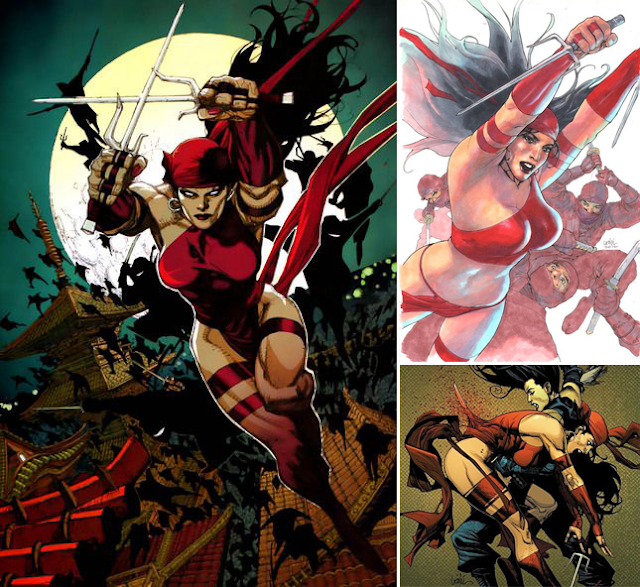 If another solo series is on the rise, I would back Leinil in a heartbeat. He's woefully without a huge gig at the moment, and he could do for Elektra what he did for Wolverine - even without a writer. I mean with art this good, I wouldn't mind a silent series. Would you?

Who is your favourite Elektra artist?
Posted by IADW at 9:11 pm