SWEET AS: The Top 6 From Marvel's June 2016 Solicitations 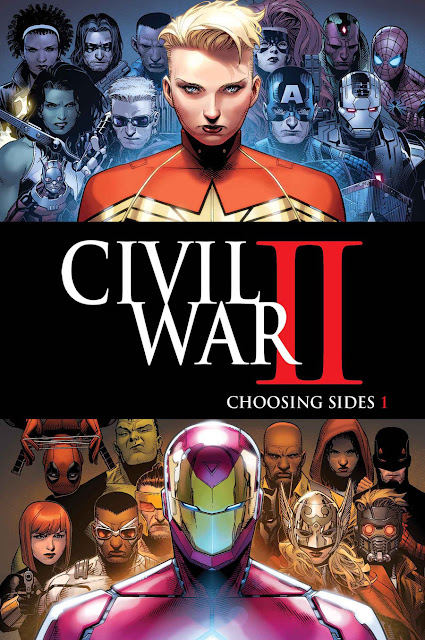 When we Kiwis find something we like, we say it's 'Sweet as'. When I look at Marvel Comics' June 2016 solicits, these six make the 'Sweet As' grade:

NEW WARRIOR WATCH:  CIVIL WAR II: CHOOSING SIDES #1 (OF 6) If you knew something bad was about to happen, would you stop it? The line is drawn. Everyone in the Marvel Universe has to ask themselves: are you with Captain Marvel or Iron Man? Kicking off an all-new series, this first issue features Nick Fury, Damage Control and Night Thrasher! 40 PGS. (W) Declan Shalvey, Brandon Easton, Chad Bowers and Chris Sims (A) Declan Shalvey, Goran Sudzuka and Leonardo Romero


PICK OF THE MONTH:  CIVIL WAR II #1 (OF 7) IT'S HERE! The explosive first chapter in the comic event EVERYONE will be talking about. A new Inhuman, with the ability to profile the future, emerges and the ramifications ripple into every corner of the Marvel Universe. Lines are drawn, bodies fall, and the Marvel Universe will be rocked to its very core. (W) Brian Michael Bendis (A) David Marquez 56pgs

JUMP ON HERE  THE VISION #8 "LITTLE BETTER THAN A BEAST" STARTS NOW! The most critically acclaimed series of the year continues. The Avengers know. They know his wife killed the Reaper and the boy. They know Vision lied to protect her. They know that those lies will lead to more lies, those deaths will lead to more deaths.

SOUNDS LIKE AWESOME  SILVER SURFER #6 SILVER SURFER #200! After Norin Radd's massive status quo change in the 50th Anniversary issue (no spoilers!), it's now Dawn Greenwood's turn. What's going on? Why is San Francisco overrun by monsters? And what wall-crawling, web-spinning guest-star is swinging by to help out? (Okay, it's the Amazing Spider-Man!) All this and tons of cosmic weirdness, surprise super heroes, and special stories as we celebrate the 200th Silver Surfer issue! 40pgs. (W) Dan Slott (A) Michael Allred

CIVIL WAR II #2 (OF 7) Two issues in one month? Hell yes! As the Marvel Universe reels from the events of the first issue, Tony Stark decides to take matters (and the law) into his own hands and declares war on the Inhumans. But not everyone agrees with Tony's perspective and they are willing to die trying to stop him. 40pgs (W) Brian Michael Bendis (A) David Marquez

DAREDEVIL #8 Losing a big case has landed A.D.A. Matt Murdock in night court for the foreseeable future--meaning less time to clean up the streets as Daredevil. Luckily Blindspot's around to pick up the slack. But the young hero might be in over his head when he stumbles upon a horrific crime scene--one that will terrify even The Man Without Fear. (W) Charles Soule (A) Ron Garney

INVINCIBLE IRON MAN #10 On the road to CIVIL WAR II! It is Tony against some of his closest and dearest friends as the portents of civil war rock Tony and his status quo to its very foundation. We can't tell you anything else without spoiling Civil War II, but you will NOT want to miss this emotional and explosive chapter.! (W) Brian Michael Bendis (A) Mike Deodato

What do you think? Full Marvel's June 2016 solicitations here.
Posted by IADW at 7:56 pm