Now remove the toothpick or I remove your arms.

This month's pull list was sink or swim time, as I make room for DC's Rebirth. The first comic to float like a butterfly; Bloodshot Reborn #11, part two of post-apocalyptic storyline The Analog Man.

One of the reasons these future-set fantasy's do so well is the way they interpret your favourite characters in ways you can't see coming. Hulk in Old Man Logan, Havok in Age of Apocalypse, The Atom in Rock of Ages, and now in The Analog Man, it's the Shadowmen. 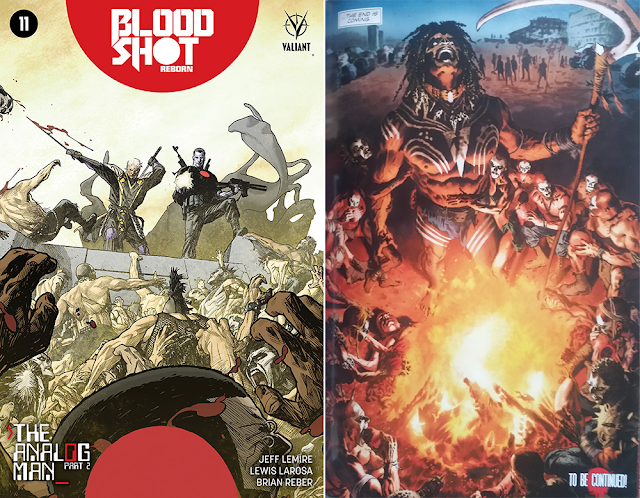 As for the man himself, Ray Garrison lives in a village of outcasts on the outskirts of L.A., with the love of his life, Magic. Having grown old and happy leading a rural life, he only powers up into Bloodshot when water or protection is needed.

His last run for H2O sabotaged by the Shadowmen, Ray comes attitude to attitude with Ninjak, the last remaining survivor of the L.A. resistance. Having barely escaped with his life during his last encounter with the Goo and army of X-O Manowar sentinels inside the city walls, Ninjak asks Bloodshot to return with him, in order to let his nanites bond with the Goo to find out who is behind the A.I. terror.

Bloodshot's resolve at saying 'no' soon wilts, and he heads down the only path left to him, with a ninja at his side.

Jeff Lemire's script is perfectly paced and packed. Instead of being over-descriptive about the state and fates of the future, Jeff reveals the bare minimum, gives the story room, and leaves imaginations to fill the gaps.

The real gas on the fire of Valiant's new flagship book however is the artistic tag team of penciller Lewis Larosa and colourist Brian Reber. The watercolour-ish look of these pages adds to the desert feel, and the detail / page layouts are stunning to look at. Bloodshot looks so real, a live action movie will be hard pressed to do better.

The Analog Man in a monthly comic may sound outdated, but if there's any story you should non-digitally hold in your hands, this is it.
Posted by IADW at 7:35 pm