THE TOP 12 OTHER SUPER-HERO TEAMS IN COMICS: 10 - Force Works

Sure, the world knows the X-Men, Fantastic Four, Avengers, Justice League and Teen Titans, but what about comics' other mighty marvels? The 'big guns' distinguished competition? These are the teams that should be FAMOUS!

Every fortnight I'll chart another of my Top 12 Other Super-Hero Teams, and why they're just as good (if not better) than the big sales and fan hoggers we all know. Today, the revamped Avengers West Coast; FORCE WORKS! 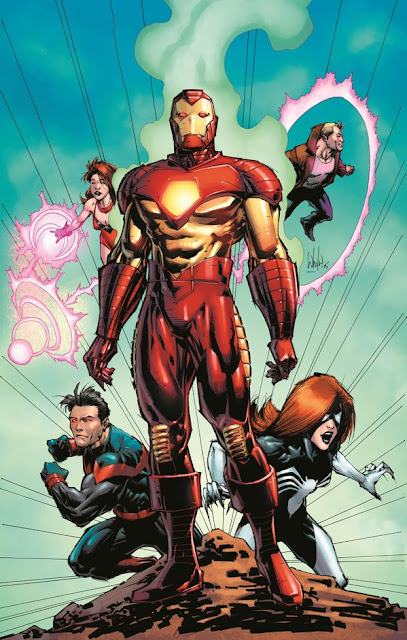 WHY THEY'RE COOL: The best time of my comic collecting history was with this series. As a major fan of the Avengers West who felt they always got overlooked in favour of 'earth's mightiest', I was stoked to see the team quit The Avengers and strike out on their own. Backed by state of the art tech that allowed them to predict chaos points on the planet, they no longer simply 'avenged'.

Dan Abnett and Andy Lanning (DnA) of Guardians of the Galaxy fame perfected modern team comic traits here. Scarlet Witch and Iron Man argued over leadership, Wonder Man died in the first issue (without any hype!), and the series revamped overlooked characters, such as U.S. Agent and The Scarlet Witch.

For foes, the threats were insane; The Mandarin, The Scatter, Ember and Black Brigade. Skrulls. War Machine and Hawkeye teasingly inched closer to membership every issue, while newbies Century, Dreamguard and Cybermancer were as interesting as Iron Man himself. And all the while a Recorder recorded...

STAR PLAYER: Scarlet Witch. Force Works finished the job Avengers West Coast started, by moving Wanda out of The Vision's shadow, making her more than the red caped woman with parlour trick magics. This Scarlet Witch was a strategic, strong and experienced leader. As her powers grew, DnA proved why she'd never 'Disassemble' The Avengers, but when she tracks down Wonder Man's killer in #14, he might not be able to say the same.

RECOMMENDED READING: Due to DnA's obvious long term plans being criminally cut-short thanks to Marvel's 90's line wide slash back, the selections are few. However if you grab issues #4, 5, 11 and 12, you'll see the team thrust into a european civil war, stuck between military forces, and the two legendary defenders of each side.

Then there's Tales of the Marvels - Wonder Years, a haunting two shot painted series exploring the impact of Wonder Man's death on his fictional fans, and a realisation that will leave you shaking. Yup, trust me folks, force works.
Posted by IADW at 9:19 pm