This September DC is set to kick off an all-new 'quirky' mature readers imprint; Young Animal. Fresh talent on cult favourites like Doom Patrol and Shade The Changing Man (or girl in this latest case), mean this isn't just the new DC's take on Marvel Knights, it's a 90's comic hit with modern talent, just when the industry needs it most. 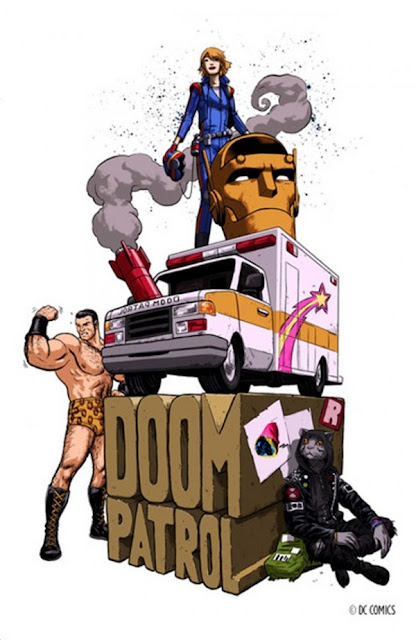 Hoping to recapture the experimentalism in DC Comics at the end of the last millennium, the four books curated by My Chemical Romance's Gerard Way feature three revived concepts and one fresh new creation, spinning out of (but not officially in-continuity connected to) the Batman universe.

DOOM PATROL (September) In the spirit of Grant Morrison's legendary run on the series, along with other classic incarnations of the characters, writer Gerard Way and artist Nick Derington will put their unique stamp on the world's strangest heroes taking on the universe's strangest villains.

SHADE, THE CHANGING GIRL (October) An alien takes over the body of a 16-year-old bully and must face the challenges of being a stranger in a foreign land, plus the consequences of a life she didn't live. (W) Cecil Castellucci (A) Marley Zarcone explore themes of madness, alienation, and the bizarre in this sci-fi thriller, with covers by Becky Cloonan.

CAVE CARSON HAS A CYBERNETIC EYE (October) A strange adventure with DC Comics’ Silver Age character Cave Carson, his cybernetic eye and his college–age daughter as they travel to dark places deep in the earth and mind. (W) Gerard Way and Jon Rivera (A) Michael Avon Oeming

Personally I like the sound of comics taking risks again and not just by changing the gender / ethnicity / orientation of the main hero in order to grab a news headline.

I want a Doom Patrol where freakish things happen, change is on every page and no topic is taboo - because that's what I associate with my favourite 'x-men' - and not just Grant's team either. The DP get too confined as super-heroes, so a more fluid label like Young Animals should do the crew justice, just like it could in future to The Spectre, Challengers of the Unknown or Dial 'H' For Hero.

Add this to the new DC Rebirth concepts, plus Kamandi Challenge and it truly looks like DC is back and playing for keeps.
Posted by IADW at 6:37 pm