SWEET AS: The Top 6 From DC Comics' July 2016 Solicitations 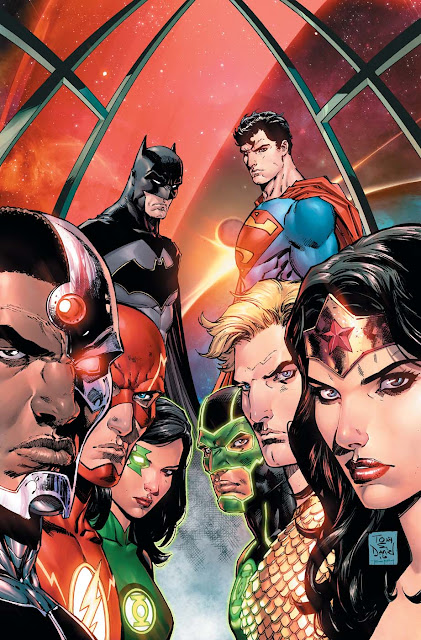 When we Kiwis find something we like, we say it's 'Sweet as'. When I look at DC Comics' July 2016 solicits, these six make the 'Sweet As' grade:

PICK OF THE MONTH  JUSTICE LEAGUE: REBIRTH #1 variant cover by Joe Madureira! Spinning out of the events of DC Universe: Rebirth #1, a new day dawns for Earth's greatest heroes as they welcome three new members to the team, including... Superman? Who is this strange visitor from a dead world--and can he be trusted? Batman and Wonder Woman aren't so sure. (W and A) Bryan Hitch

Why: Joe Mad on DC and an awesome twist like the pre-52 Superman on the team - my wallet's open and waiting.

WONDER WOMAN #2 and #3 (W) Greg Rucka #2 "Wonder Woman Year One" Chapter One: Running parallel to "The Lies," the definitive and shocking tale of Diana's first year as Earth's protector. (A) Nicola Scott #3 "The Lies," chapter two Wonder Woman must team up with one of her greatest enemies to solve a growing mystery about Themyscira! (A) Liam Sharp

HAL JORDAN AND THE GREEN LANTERN CORPS: REBIRTH #1 and #1 In the absence of the Green Lantern Corps, Sinestro and his fear-inducing Yellow Lantern Corps patrol the universe as its sole protectors--but deep in space, a green light still burns. Harnessing the remainder of his will, Hal Jordan must become a one-man GL Corps to defeat his greatest foe and restore freedom to the cosmos. (W) Robert Venditti (A) Ethan Van Sciver
#1 's Law" Chapter One. With no backup and only his ring and battery to keep him alive, Hal Jordan streaks toward battle with the Sinestro Corps, while his greatest foe prepares to wipe the last Green Lantern of them all out of existence! (W) Robert Venditti (A) Rafa Sandoval and Jordi Tarragona

ACTION COMICS #959 and #960 (W) Dan Jurgens (A) Tyler Kirkham #959 "Path to Doom" Chapter Three: Clark Kent gets caught in the crossfire as Doomsday crashes through the streets of Metropolis! As Lois struggles to keep young Jonathan out of the path of destruction, can former enemies Superman and Lex Luthor stop the monster that once destroyed the city and killed the Man of Steel--or does Luthor have other plans?
#960 "Path to Doom" Chapter Three Four: Wonder Woman joins the fight, but even her added might can't slow down Doomsday's rampage! As Superman comes face-to-face with the woman who once loved him, the Man of Tomorrow must also wrestle with the reappearance of Clark Kent. 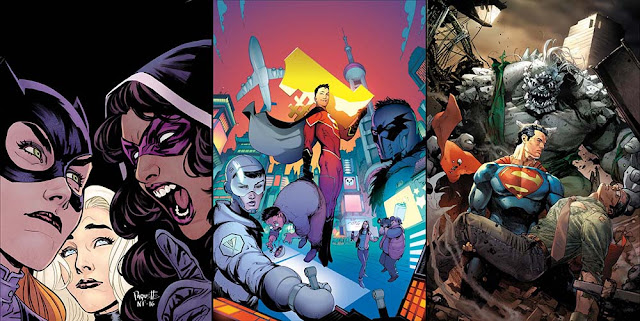 JUMP ON HERE  BATGIRL AND THE BIRDS OF PREY: REBIRTH #1 "Who Is Oracle" Chapter One: Batgirl and Black Canary are together again, working a case that strikes right at the heart of their partnership! Someone's uncovered the greatest secret Barbara Gordon ever kept: her time as Oracle, the most powerful hacker on the planet. And not only do they know her secret, they're using her name to sell dangerous information to criminals! Now one of those deals has brought some major heat to Gotham City...Helena Bertinelli is out of Spyral, wearing the hood of the Huntress, and making mafia blood run in the streets! Everything you thought was hidden will be revealed if the Oracle has their way.. (W) Julie Benson and Shawna Benson (A) Claire Roe

SOUNDS LIKE AWESOME  NEW SUPER-MAN #1 "Made In China" Chapter One: An impulsive act of heroism thrusts an arrogant young man into the limelight of Shanghai as China begins to form its own Justice League of powerful heroes. Rising from the ashes of The Final Days of Superman, meet Kong Kenan--the New Super-Man! When the world needed a new hero, China made him! (W) Gene Luen Yang (A) Victor Bogdanovic

What do you think? For DC's full July solicits, click here.
Posted by IADW at 7:51 pm