SWEET AS: The Top 6 From Image Comics' July 2016 Solicitation 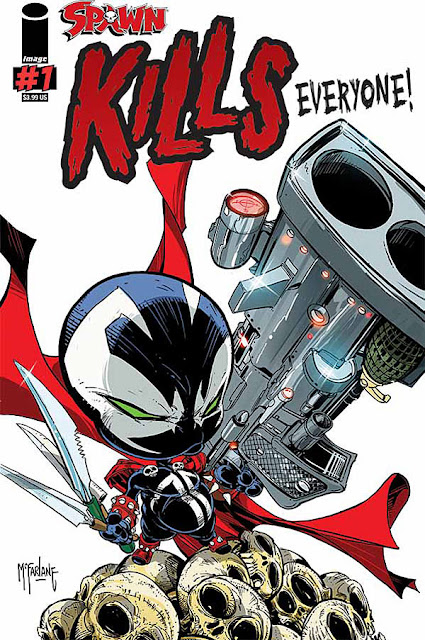 When we Kiwis find something we like, we say it's 'Sweet as'. When I look at Image Comics' July 2016 solicits, these six make the 'Sweet As' grade:

PICK OF THE MONTH:  HORIZON #1
Zhia Malen thought she'd fought her very last war, until she learned her planet was targeted for occupation... by a desperate world called Earth. The people of Earth will be told that her arrival on their planet means invasion; these are lies, this is retaliation. Skybound (W) Brandon Thomas (A) Juan Gedeon and Frank Martin

SOUNDS LIKE AWESOME  SPAWN KILLS EVERYONE!
Do you have a favorite hero?! Better change it... they're DEAD! If you ever wondered who the strongest hero is, THIS BOOK ANSWERS IT! It's SPAWN... he kills EVERY HERO! 40pgs (W and A) J.J. Kirby and Todd McFarlane

TOKYO GHOST #9 The clock is ticking down on Davey Trauma's apocalyptic pleasure cruise, and what he has planned at midnight won't just spell doom for New Los Angeles, but the whole world!. W) Rick Remender (A) Sean Murphy

C'MON IT'S FRANK QUITELY  JUPITER'S LEGACY VOL. 2 #2 (OF 5) Our superheroes face off with psychic Japanese villain Raikou, battling through different levels of consciousness to assume her powers and recruit Repro for their team. While the villains seize cities and begin their stranglehold on the global economy, will faces from the past distract our heroes from their goal? (W) Mark Millar (A) Frank Quitely

What do you think? Full Image Comics July 2016 solicits here.
Posted by IADW at 6:50 pm