It's line-ups like this that make you glad to be a comics' fan. Image Expo has unveiled a slew of titles, featuring creators such as Brian Azzarello, Eduardo Risso, Esad Ribić and Karl Kerschl. Concepts like a cold war covert agent ballet school, werewolf gangsters and more. Set to further benchmark Image Comics as the industry's most distinctive publisher, here is a quick rundown of the wave ahead: 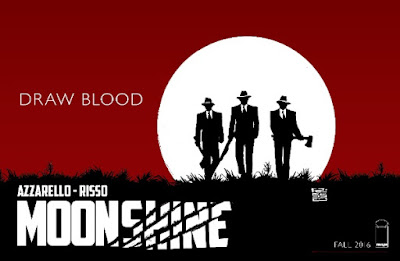 MOONSHINE Set during the Prohibition Era, Lou Pirlo, a city-slick “torpedo” is sent from New York City to negotiate a deal with the best moonshiner in West Virginia, Hiram Holt. What Lou doesn’t figure is that Holt is just as ruthless as any NYC crime boss and he is in way over his pin-striped head. Not only will Holt do anything to protect his illicit booze operation, he’ll stop at nothing to protect a much darker family secret...a bloody, supernatural secret that must never see the light of day… or better still, the light of the full moon. Werewolves, hillbillies and more Fall 2016 / Brian Azzarello / Eduardo Risso

KILL OR BE KILLED The ultimate pulp crime comic. A troubled young man is angry at the world and compelled to kill bad people. Struggling to keep his secret, it slowly begins to ruin his life and the lives of his friends and loved ones. Summer 2016 / Ed Brubaker / Sean Phillips

VS Follow the rise and fall of Satta Flynn, a wildly popular soldier in a time when War is privatized and a form of entertainment. Armies financed by super-corporations. Satta's every move is LIVE on TV. And for the first time, Satta finds out what it's like to lose. Fall 2016 / Ivan Brandon / Esad Ribić 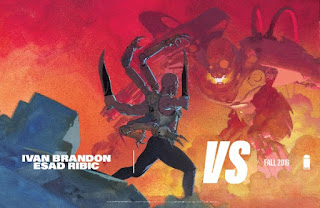 ISOLA The queen’s brother enacts a treacherous plot, transforming her into a tiger. The captain of the guard, brings swift and lethal vengeance, unaware the prince alone has the power to reverse the spell. The two women—one on two legs, one on four—journey to the island of Isola, gateway to the underworld, to find the spirit of the queen’s late brother and return her to human form. Spring 2017 / Brenden Fletcher / Karl Kerschl

GLITTERBOMB Set in Hollywood, it's time to eat the rich. For real. Farrah is a middle-aged actress who can't get roles anymore. She wants to tear the Hollywood system down, and she'll do it in the most violent, horrific way possible. Summer 2016 / Jim Zub / Djibril Morissette-Phan

For more titles revealed at Image Expo, click through to the next page.

HORIZON Zhia Malen had fought her last war, until she learned her planet was targeted for occupation…by a desperate world called Earth. We will be told her arrival means invasion. This is a lie. This is retaliation. Zhia will make us take responsibility for our actions. July, 2016 / Brandon Thomas / Juan Gedeon

LAKE OF FIRE 1220 AD: an alien mining craft infested with legions of bloodthirsty predators crash-lands in the remote wilderness of the French Pyrenees, a small band of crusaders and a Cathar heretic are all that stands between God's Kingdom and Hell on Earth. Summer 2016 / Nathan Fairbairn / Matt Smith

PRIMA Sophia Forais and Pauline French are part of a dance company that served as a front for the Resistance. When a veteran of the Romanian underground is blackmailed, they learn the war has not really ended, and the world is no less ruthless. Fall 2016 / Jen Van Meter / Rick Burchett,

ROMULUS The last near-mystical martial artist wages war against The Order of Romulus, the ancient secret society that trained her. One that's controlled the world since Ancient Rome and who plan to cull the population and rule a New World Order. Fall 2016 / Bryan Hill / Nelson Blake II 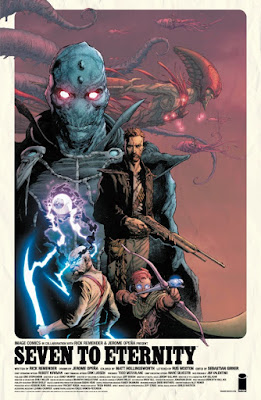 SEVEN TO ETERNITY Adam Osidis is a dying knight from a disgraced house, on a mission to rid his world of an insidious God who ensnared him in a Faustian deal. Gharils Sulm, The God of Whispers is a warlord who holds sway everywhere. Adam must choose between joining a hopeless band of magic users in their desperate bid to free their world of the evil God’s burden or give in to the The God of Whispers’ promises of salvation and safety. Fall of 2016 / Rick Remender / Jerome Opeña.

MOTOR CRUSH Domino Swift competes in a motorcycle racing league. By night, she cracks helmets of rival gangs to gain the contraband engine-boosting MOTOR CRUSH. But the origins and purpose of this substance are unknown, and now she lies in danger. December 2016 / Brenden Fletcher / Cameron Stewart

AFAR Boetema can astrally possess bodies on other worlds. Inotu, her brother, finds himself on the run from business tycoons and their cyborg bodyguard. When Boetema accidentally hurts someone, the siblings must work together to solve the problems they've created on their planet and others. Fall 2016 / Leila Del Duca / Kit Seaton

BLACK CLOUD Once upon a time they built a world where dreams come true... And those dreams went to war. Meet Zelda: exiled to Earth, her dreams of revolution are gone, but she still holds the key to the world she left behind. And it’s for sale. Fall 2016 / Jason Latour / Ivan Brandon

THE DIVIDED STATES OF HYSTERIA Set in the aftermath of a dirty bomb that wipes New York City off the map, a team of five private contractors are charged with stemming this tide of rage and bringing the bombers to justice. Winter 2016 / Howard Chaykin

THE HUNT At her father’s deathbed, Orlaigh Roche came face to face with the myth of The Slaugh; a group of soul-stealing spirits so evil that hell wouldn't take them. Years later, believing her father’s soul is still trapped in a netherworld, she goes looking for answers. Colin Lorimer / Jim Campbell

THE BLACK MONDAY MURDERS All hail god money! The secret schools of magic are clandestine banking cartels who control all of society. Black Popes, enchanted American aristocrats, and hitmen from the International Monetary Fund work o keep ALL OF US in our rightful place. Fall 2016 / Jonathan Hickman / Tomm Coker

PRINCE OF CATS Sets Shakespeare's Romeo and Juliet in an alt-universe, mid-80's New York where dueling with live blades is a cultural phenomenon; it eschews the story of the titular star-crossed lovers to follow the tragic story of Tybalt, the Prince of Cats. Remastered author’s edition. Fall 2016 / Ron Wimberly