SWEET AS: The Top 6 From Marvel's July 2016 Solicitations 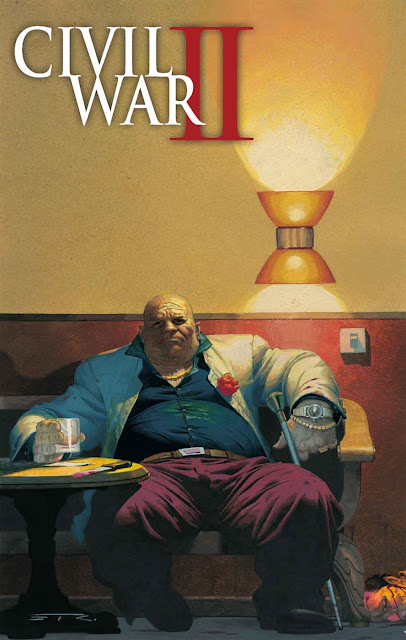 When we Kiwis find something we like, we say it's 'Sweet as'. When I look at Marvel Comics' July 2016 solicits, these six make the 'Sweet As' grade:

PICK OF THE MONTH:  CIVIL WAR II: KINGPIN #1 An Inhuman with the ability to predict the future has helped the heroes of the Marvel Universe clamp down on crime before it can even happen. While this thwarts most criminals, one man has found a way to keep doing what he does best. Wilson Fisk has managed to stay one step ahead of the good guys and his crime enterprise is BOOMING. But what's his secret?! A gritty, street-level view of Civil War II starring the Kingpin in a world without crime! (W) Matthew Rosenberg (A), Ricardo Lopez Ortiz 40 pages

Why: It's about time the Kingpin was restored to the top of the crime ladder!


CIVIL WAR II WATCH
#3 This is the one everyone will be talking about! One of the biggest heroes in the Marvel Universe will fall! Who it is and how and why will divide fans for years to come. Will the heroes of the Marvel Universe survive the unthinkable happening? The fallout to this issue is enormous! (W) Brian Michael Bendis (A) David Marquez 40 pages

#4 Sides are harshly divided as the Marvel Universe's trial of the century reaches its shocking verdict! Now, the abstract issues are very real for the heroes of the Marvel Universe and battle lines must be drawn. Captain Marvel or Iron Man, who will each hero stand behind? (W) Brian Michael Bendis (A) David Marquez 40 pages


SOUNDS LIKE AWESOME  THE VISION #9 Every family has its share of secrets â€“ skeletons in the closet, kept hidden from the world at large. For the Visions, those secrets are real, actual skeletons. The thing about secrets is they always have a cost... and one of the Visions is going to pay with their life. (W) Tom King (A) Gabriel Hernandez Walta

INVINCIBLE IRON MAN #11 During the last Civil War, Tony Stark and Captain America battled to the bitter end. Now they find themselves on the same side. Or do they? It is Steve Rogers and Tony Stark like you have never seen them before. (W) Brian Michael Bendis (A) Mike Deodato

What do you think? Full Marvel's June 2016 solicitations here.
Posted by IADW at 8:00 pm