DOOMED TO RETURN: The Revival Of Ominous Press

From Operation: Galactic Storm to Kurt Busiek and George Perez on The Avengers, I loved the 90's. However, as odd as it may seem today, not all the major moves of the decade came from earth's mightiest, nor were they all Marvel's.

Defiant, The Ultraverse, Chaos!, Crusade, Techno, AC Comics, London Night Studios - and more, the 90's was the decade where the small publisher roared.

Now one of that indie crowd has found a new set of lungs, as CBR reports living legend, Bart Sears looks to revive his Ominous Press label at HeroesCon in June, alongside friends; Tom Raney, Ron Marz and Andy Smith.

All 'Sears ideas' and new reader friendly, the debut titles of the line below were inspired by the energetic tone of flawed heroes like Conan and Doc Savage, who existed outside the super-hero genre. 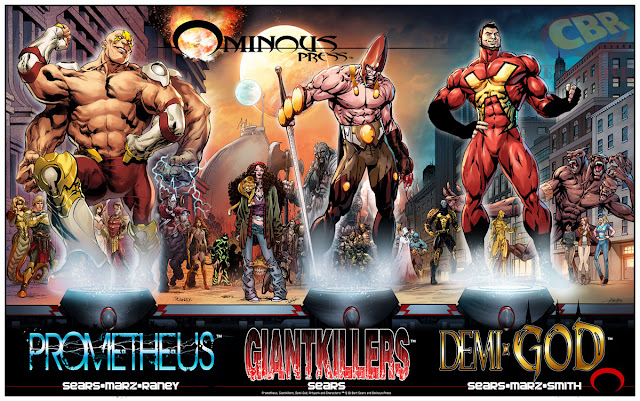 PROMETHEUS (W) Ron Marz (A) Tom Raney Heroes in a fantasy world find out they're actually monsters in the real world of a dystopian future. "The Matrix" mixed with "Judge Dredd."

DEMI-GOD (W) Ron Marz (A) Andy Smith A modern slacker gets "rewarded" with the powers of a mythological god, but lacks the responsibility to use them. Over-the-top action, humor and a lead character who's a "really appealing jerk".

This is great news. All are pros I never tire of seeing in action, especially Bart Sears. From CrossGen to X-O Manowar, his talent is always stunning to the eye. While I missed much of the original material due to a much smaller income in the 90's, fresh characters with more Conan-ish type adventures definitely has me looking forward to Giantkillers - if not all three! What do you think?
Posted by IADW at 8:06 pm