SWEET AS: The Top 6 From DC Comics' August 2016 Solicitations 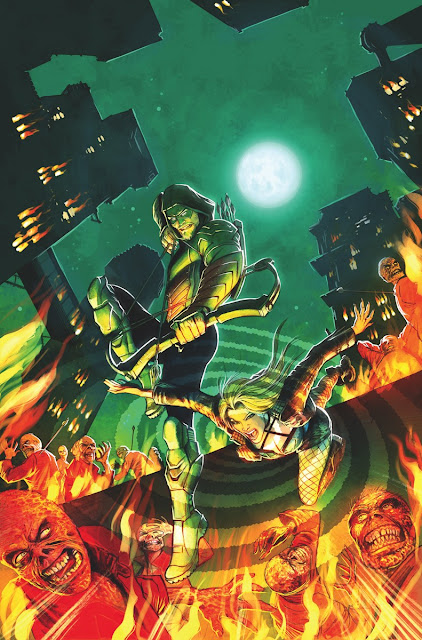 When we Kiwis find something we like, we say it's 'Sweet as'. When I look at DC Comics' August 2016 solicits, these six make the 'Sweet As' grade:

PICK OF THE MONTH  GREEN ARROW #4-5 (W) Benjamin Percy (A) Juan Ferreyra “The Death and Life of Oliver Queen” #4 Black Canary steps through the deadly gates of Inferno, the global super-villain answer to Fort Knox, to discover the truth behind the destruction of Oliver Queen’s life, fortune and reputation. Meanwhile, Seattle’s manhunt for the outlaw Green Arrow takes an exhilarating twist when an old frenemy makes an unexpected return.
#5 It’s Green Arrow and Black Canary versus Shado and the Ninth Circle in the belly of the Inferno.

WHY: Green Arrow: Rebirth was one of the surprise hits of the line wide revamp for me so far. Something tells me Mr Percy is just getting started!

WONDER WOMAN #4-5 (W) Greg Rucka #4 "Wonder Woman Year One" Chapter two! Paradise has been breached, Ares stirs, and the Amazons must answer with a champion of their own…one who is willing to sacrifice her home amongst her sisters to save a world she has never seen. (A) Nicola Scott #5 "The Lies," chapter three! Steve Trevor finds himself trapped in the heart of Urzkartaga’s darkness, with Wonder Woman and Cheetah the only hope of rescue for him and his men. But how far can Cheetah be trusted? (A) Liam Sharp

HAL JORDAN AND THE GREEN LANTERN CORPS: #2-3 “Sinestro’s Law” (W) Robert Venditti (A) Rafa Sandoval #2 As Sinestro’s grip around the universe grows tighter, Guy Gardner takes on the mission to bring the Green Lantern Corps back from the edge of oblivion to reclaim their role as protectors of the cosmos.
#3 Pushed to his limits, Hal Jordan must fight his way through a squad of Sinestro Corps members—but he risks losing himself to the power he now wields as his battle with Sinestro nears.

AQUAMAN #4-5 (W) Dan Abnett (A) Philippe Briones “The Drowning” #4 Aquaman is arrested for a war crime he didn’t commit: ordering an Atlantean terrorist attack on the surface, killing hundreds! The young king is willing to sit behind bars if it means peace between two worlds, but one ally is determined to break Aquaman out, no matter the cost: his girlfriend Mera!
#5 Unjustly branded a murderer and a fugitive, Aquaman’s forced to defend himself against the might of America’s military. Meanwhile, Black Manta and the deadly underwater crime cabal known as N.E.M.O. advance their plan for revenge on Aquaman. 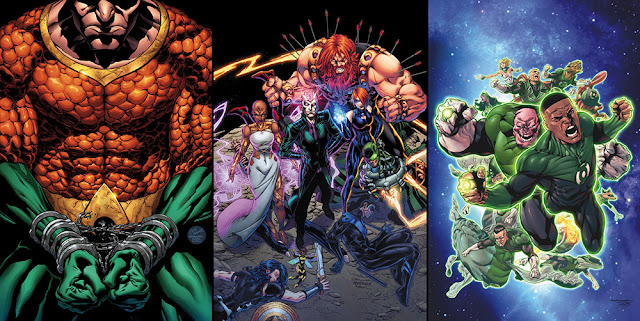 ALL-STAR BATMAN #1 “My Own Worst Enemy” part one! Batman must take Two-Face to a destination out of Gotham City, but the duplicitous villain has a two of spades up his sleeve. Every assassin, bounty hunter and ordinary citizen with something to hide is on their tails with one goal: kill Batman! Handcuffed together on the road to hell, this is Batman and Two-Face as you’ve never seen them before! (W) Scott Snyder (A) John Romita Jr

SOUNDS LIKE AWESOME  TITANS #2 “Remember the Titans” part two! As the Titans prepare to do the unthinkable in order to defeat the intergalactic demon that stole time itself from the DC Universe, enter the Fearsome Five! But are the sinister quintet acting of their own accord…or are greater forces at work? (W) Dan Abnett (A) Brett Booth

What do you think? For DC's full August solicits, click here.
Posted by IADW at 8:18 pm