SWEET AS: The Top Comics From Marvel's September 2016 Solicitations

When we Kiwis find something we like, we say it's 'Sweet as'. When I look at Marvel Comics' September 2016 solicits, these picks make the 'Sweet As' grade:

PICK OF THE MONTH:
OLD MAN LOGAN #11 Logan is forced to confront the mysterious Silent Order - a group of warrior monks who threatened his life in the Wasteland! Logan will have to team-up with LADY DEATHSTRIKE in order to escape his foes...postponing the revenge he desperately wants to take against her. (W) Jeff Lemire (A) Andrea Sorrentino

SPIDER-MAN/DEADPOOL #9 Her name is ITSY-BITSY and she's Spider-Man and Deadpool's WORST NIGHTMARE! A reminder -- EVERY issue of this series has sold out SEVERAL times! Joe Kelly (W), Ed Mcguinness (A)

CIVIL WAR II: KINGPIN #3 (of 4) Wilson Fisk has reason to believe that one of his own men is staging a coup -- and killing those who won't surrender their loyalty. But mutiny becomes the least of Fisk's worries when the Punisher launches an attack on the Kingpin's safe house. Can the Fisk keep his business afloat with his cronies dropping like flies, and Frank Castle gunning for him, or is this finally the end? (W) Matthew Rosenberg (A) Ricardo LÓpez Ortiz

DAREDEVIL #11 A serial killer who turns his victims into works of art is on the loose. Can Daredevil and Blindspot stop him before he reveals his next "masterpiece"? (W) Charles Soule (A) Ron Garney

INVINCIBLE IRON MAN #13 Civil War II tie-in! It's the end of an era as the events of Civil War II come right to Tony Stark's front door. Could this be the end of Iron Man as we know him? (W) Brian Michael Bendis (A) Mike Deodato 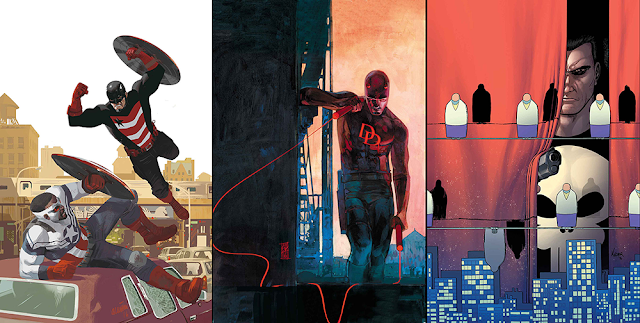 What do you think? Full Marvel's September 2016 solicitations here.
Posted by IADW at 5:15 am