SWEET AS: The Top 6 From Marvel's August 2016 Solicitations

When we Kiwis find something we like, we say it's 'Sweet as'. When I look at Marvel Comics' August 2016 solicits, these six make the 'Sweet As' grade:

PICK OF THE MONTH:  SPIDER-MAN/DEADPOOL #8 Finally, Spider-Man and Deadpool are face to face with the person who has caused all the events of this series! Who is Patient Zero?! Every issue of this book has sold out and come back with second printings (and #1 is on its fifth), so don't sleep on this one! Joe Kelly (W), Ed Mcguinness (A)

THE VISION #10 Tragedy has come to the Vision family. While those around him mourn, Vision plans for revenge, a revenge that will send him into a deadly confrontation with the heroes of the Marvel Universe. As the saga of Vision and his family draws closer to its world-shaking conclusion, don't miss out on the series everyone is talking about! (W) Tom King (A) Gabriel Hernandez Walta.

CIVIL WAR II #5 The devastating fallout from the first half of this event is enormous and being felt in every corner of the Marvel Universe. The truth about Ulysses' future-seeing power is revealed and it is a game changer. Sides are irrevocably drawn and the gauntlet is thrown for the biggest battle in Marvel Universe history. And that's just the stuff we can tell you. All this, and the story goes galactic! 40 pages, $4.99. (W) Brian Michael Bendis (A) David Marquez 40 pages

EXTRAORDINARY X-MEN #13 "Kingdoms Fall" starts now! An ancient evil stirs in the periphery of Limbo, consuming mystical realms and little does Magik suspect that the X-Men's newest charge is drawing it straight to X-Haven! Meanwhile, Colossus is rampaging across Earth...as a Horseman of Apocalypse. Can Nightcrawler and Iceman stop their longtime friend and teammate and wrest him from Apocalypse's grasp? (W) Jeff Lemire (A) Victor Ibañez 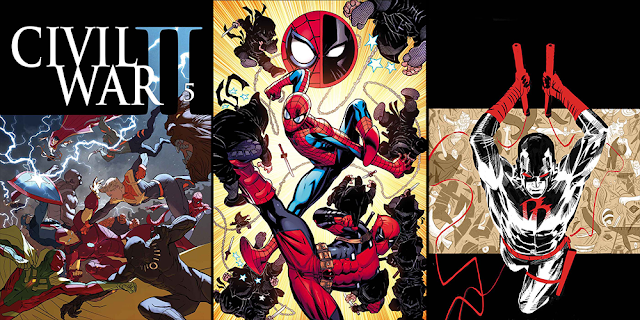 DAREDEVIL #10 "The Dark Art" starts now! Losing a big case has landed A.D.A. matt murdock in hot water with the city, leaving him less time to clean up the streets as daredevil. But as his protégé Blindspot tries to pick up the slack, the young hero might be in over his head when he stumbles upon a horrific crime scene -- one that will terrify even The Man Without Fear. (W) Charles Soule (A) Ron Garney

INVINCIBLE IRON MAN #12 Civil War II tie-in! A heartbreaking chapter in the history of Iron Man as the events of CIVIL WAR II come crashing down around him. Plus, what exactly is Doctor Doom up to in the time of all-out CIVIL WAR? (W) Brian Michael Bendis (A) Mike Deodato

What do you think? Full Marvel's August 2016 solicitations here.
Posted by IADW at 1:15 pm