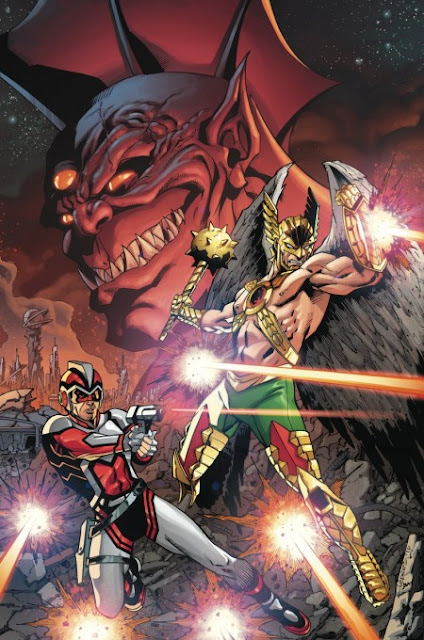 Everyone remembers the first time they met the work of artist Ivan Reis. For me it was on DC's Infinite Crisis tie-in series, Rann-Thanagar War, which threw so many of my favourite DC concepts into a cosmic 'star wars' it was hard not to giggle with glee at the turn of every page.

Now a new six issue mini-series is set to reignite the interplanetary civil war this October (not called Civil War II however - that was apparently taken), as Adam Strange returns to the planet of Rann, only to find millions dead, and his wife Alanna calling for the blood of all Thangarians in return.

Titled Hawkman and Adam Strange: Out of Time,
the series will see Strange partner with Thanagarian policeman Katar Hol to find out who is truly behind the mass murder of innocents before the two worlds truly collide (hint that three eyed classic DC face in the background is probably a good clue).

While Hawkman needs to cut back on wearing all the gold jewels and Strange needs more of his classic ray gun and jetpack look back, this series written by Marc Andreyko and drawn by Aaron Lopresti looks to 'rebirth' at least three classic DC characters and pump up the publisher's on fire cosmic universe at the same time!
Posted by IADW at 6:04 pm