SWEET AS: The Top October 2016 Solicitations From Comics' Other Publishers 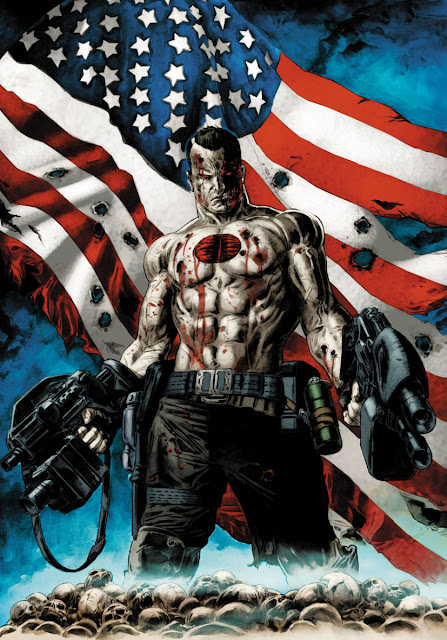 When we Kiwis find something we like, we say it's 'Sweet as'. When I look at Valiant, Dynamite, IDW, and Dark Horse's September 2016 solicits, these comics make the 'Sweet As' grade:

PICK OF THE MONTH
BLOODSHOT U.S.A. #1 In Bloodshot we trust! Project Rising Spirit has achieved a breakthrough: a contagious, airborne nanite dispersion prototype that can turn the population of any city into an army of indestructible soldiers. A doomsday virus capable of destroying an enemy nation from the inside out, with the same cutting-edge technology that created their greatest weapon: Bloodshot.

But now... Project Rising Spirit's top-secret contagion has been released onto the streets of New York City. As mayhem engulfs Manhattan, Bloodshot must keep a runaway pandemic from toppling armies and governments...and threatening to destroy humanity itself. (W) Jeff Lemire (A) Doug Braithwaite

PREDATOR VS JUDGE DREDD VS ALIENS #4 (of 4) Road trip! The mad, gene-splicing scientist Dr. Reinstöt is having the best summer ever as he hits the road toward Mega-City One in a stolen Predator ship with his new BFF, the murderous Archbishop Emoji, riding shotgun and a homegrown crew of xenomorphs. Spoilsport Judge Dredd and his killjoy Predator friends are hot on their tail, but Dr. Reinstöt has a secret weapon that will keep the party going until the end of time! Which might be tomorrow, if Reinstöt has his way. Either way, it's going to be a killer. (W) John Layman (A) Chris Mooneyham

RAGNAROK #11 Thor Odinson and the Black Elf assassin, Regn, face off against the Lord of the Dead and his draugar in the Dark Tower, the citadel of his power that stands on the edge of Hel. 40 pages (W) Walter Simonson (A) Geof Darrow 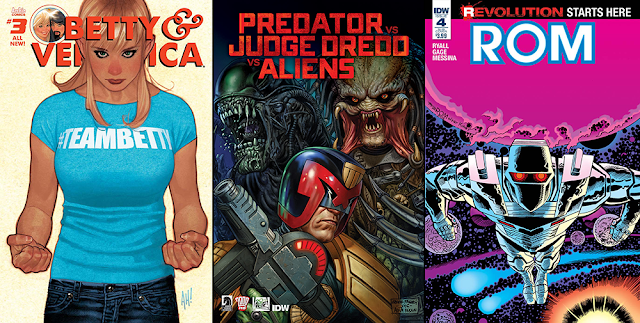 CREATOR SPOTLIGHT  BETTY & VERONICA #3 (W & A) Adam Hughes. All Heck breaks loose in Riverdale as "Betty Versus Veronica" reaches its combustible conclusion! Divided by Pops' Chocklit Shoppe being bought out by Big Coffee, the forces of Team Betty and Team Veronica clash at the Halloween dance. Who will lose? Will there be sniffling? The streets of Riverdale run red and no one will ever be the same (slight use of hyperbole there)!

BLOODSHOT REBORN #18 "Bloodshot Island" epilogue! Ray Garrison and a battered team of survivors have made their escape from Bloodshot Island...only to drift straight into shark-infested waters! Marooned in the middle of the Pacific Ocean with no defenses except the relentless will to survive, will the highly trained team of killers aboard this life raft band together...or throw each other to the prehistoric predators below? (W) Jeff Lemire (A) Tomas Giorello

ROM #4 As the road leading to Revolution nears its end, meet the SORCERER-WRAITHS, who bring their special brand of alien evil to bear against a helpless ROM and his human partners, who suddenly have otherworldly problems of their own to contend with, too! (W) Chris Ryall & Christos Gage (A) David Messina