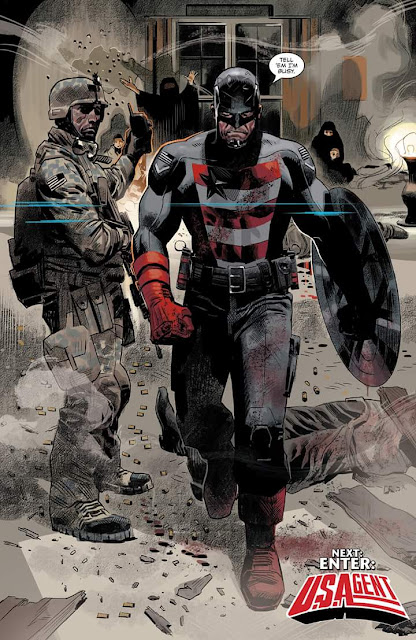 Splash pages, you gotta love 'em. A blank canvas where the artist can hit you with a large dose of illustrated 'wow'.

While it pains me to look in the direction of Hydraptain America, there's one man over in the Falcon's solo series that I've been waiting to return since... well since the end of Force Works really.

Sure, John Walker post-Force Works had a few gigs in the likes of Omega Flight and even as a prosthetic limbed superjail warden in Thunderbolts, but while each had its moments, none reached the potential of this gruff old fashioned underdog - now fully-bodied once more and ready to take names.

In fact while Agent was noticeably absent from Ed Brubaker's classic Cap run, if he is brought in as the new value driven super soldier while Snakey Steve's plot is played out, I wouldn't mind at all (especially, say should FW reform)!

What do you think? For more great splash pages, click here.
Posted by IADW at 6:54 pm