With Kratos taking a breather from being the world's #1 video game star and Ares biding his time before looming evil and large in the pages of Wonder Woman, there is space for a new God of War to steal the headlines. Low and behold, that's exactly what has happened in Jingzhou, China. Take a look: 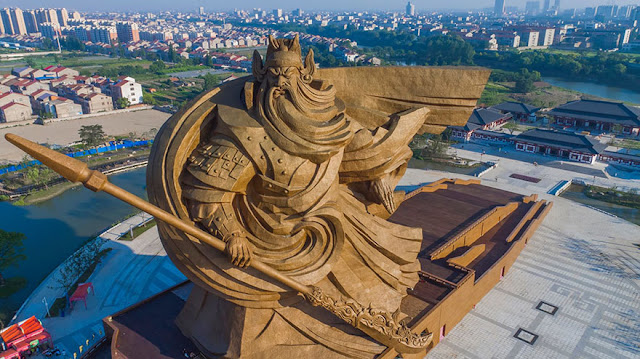 This guy's name is Guan Yu, a famous Chinese general from the nation's turbulent past, who was later deified, and now honoured with this freakingly tall 1,320 tonne statue made in his honour. Featuring his legendary 'Green Dragon Crescent Blade' the statue is situated on the water's edge of Guan Yu Park, is 190ft tall, houses a museum inside its frame and is made from over 4,000 strips of bronze.

To see more pics, including of the construction in progress, click here.
Posted by IADW at 2:04 pm