DC's February 2018 solicitations are out, and the rebirth of DC continues to stamp its authority across the comics landscape, with more new ideas, characters and twists. Here are 5 of the best footprints left in its wake.

ONE) I haven't felt the buzz of the Earth 2 novels so far, but Green Lantern: Earth One looks to change that in 144 high-concept pages. Bored with prospecting asteroids, astronaut Hal Jordan discovers a ring that re-lays cosmic adventure at his feet. First challenge: revive the Green Lantern Corps, a police force once wiped-out by the Manhunters and now lost to the stars. Yeah, see? This will definitely be what my heart desires this coming Valentine's Day. 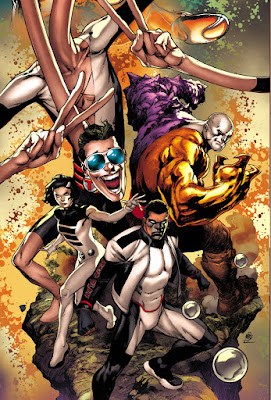 2) The JSA, Outsiders, All-Star Squadron and the Legion of Super-Heroes might all be missing from the DC line at the moment, however, chucking a representative of each into a new title with a killer creative team backs up the name in The Terrifics #1.

'The Challengers of the Unknown' feeling is fantastic, and the line-up is one of the most interesting in comics. Even before news of Tom Strong's involvement, this was a sure-fire lock for my pull-list.

3) I haven't even read the first issue of this event series, and I'm already hyped for Doomsday Clock #4. Rorschach in the DC Universe - #longoverdue.

4. I love the idea that General Zod has his own planet, and the concept is looming large (in a non-crossover way) in the pages of both Hal Jordan and the Green Lantern Corps as well as Action Comics in February, in the lead up to the milestone Action Comics #1,000. Is an inter-planetary war on the cards?

5. DC just needs to give Nightwing to Phil Jimenez for a year or two. It would be #1 with a shot. No offence to the current team, however, it's Phil, and his love for the Titans knows no bounds. In Feb, he gets the art chores for Nightwing #39 all to himself. Watch it fly off the shelves.

What're you eyeing up most from DC next Feb?
Posted by IADW at 9:00 am