Marvel's February 2018 solicitations are out, and it's Extreme Makeover: Home Edition for the former House of Ideas. Let's shake the tree and see what fruit forms the pick of the crop.

1. It's been a slippery slope ever since Wolverine joined The Avengers, and now, everyone from Hyperion to Sunspot seems to be on the team. It ain't right. When people call for "Earth's Mightiest Heroes", they should receive earth’s premier threat response unit, not whatever person has slapped on spandex in a 5-mile radius.

Seeing Marvel’s No Surrender story-arc return old favourites and include iconic moments like a team-up between Wonder Man and Beast in The Avengers this month, gives me hope that the team's upcoming revival will make 'Avengers Assemble' actually mean something once more. 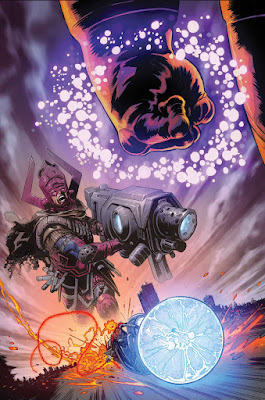 2. The caped pitchfork-welding, demon horse pulled chariot-riding version of Daimon Hellstrom, Son of Satan, was one of THE Marvel characters that first got me hooked on comics back in the 80's. So seeing the Spirits of Vengeance mini-series close in February is bittersweet, though my fingers are crossed that in its absence, Marvel doesn’t leave its often unsung 'Midnight Sons' without light for too long.

3. The mad titan's right-hand man is the cosmic spirit of vengeance, Ghost Rider, in Thanos #16! Whoever thought up this fearsome pair is NOT being paid enough. Plus: Galactus!

4. My favourite goblin is the Hobster by a landslide, however, I'm still excited that Norman Osborn is about to be the Green Goblin again in Amazing Spider-Man #796. Marvel is actually feeling like Marvel again.

5. Rarely can I end a Marvel list without some Fantastic Four-themed number. With Reed Richards stretching into the pages of Marvel 2-In-One #3, 3 quarters of the team are back in action, although that crafty minx, The Invisible Woman has probably been in every panel to this point and just hasn’t revealed herself yet.

What're you eyeing up most from Marvel next Feb?
Posted by IADW at 10:59 am