As the days before Christmas frantically disappear, DC's March 2018 solicitations are out, showing that the original super-hero universe shows no signs of slowing down in the New Year. Here are 5 of the best examples why.

ONE) I can't describe how different, amazing and completely mind-blowing writer Tom King's Mister Miracle mini-series is, suffice to say I'd stick it in every mailbox on the planet with a note 'this is what comics are capable of' if I could. Scott Free has been on trial for his suicidal efforts and relationship to the anti-life equation, seeing bold new takes on Granny Goodness (R.I.P.), Orion, and Light Ray in the process. In March's #7, the Female Furies come calling for the only person who has stayed at Mr Miracle's side; Big Barda. 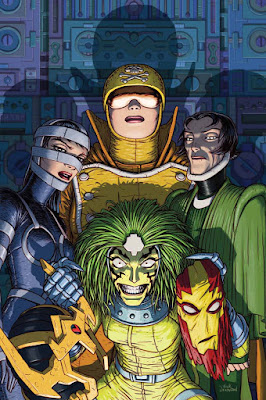 2) It's always a kick when the classic Bat-foes rear their heads, and following Tom King's work on Bane, Riddler, Joker (and even Kite Man :( ) in the pages of Batman, the current Poison Ivy arc comes to a close in March. A virus to which only Bruce and Catwoman are immune and the redemption of the envious Ivy hangs in the balance.

3) Mera: Queen of Atlantis has been a DC icon for years, and despite having quite a cut appearance in the Justice League movie, is still swinging for the fences in her own series in March, going fin-to-fin with Ocean Master in #2. By writer, Dan Abnett no less!

4. DC's fresh new character series' launches get dark in March, with The Curse of The Brimstone #1 - featuring mad talented artist Philip Tan! Joe Chamberlin needs to destroy the demon he sold his soul to in order to save his town, before the town and his humanity go up in flames.

5. Another of those 'newbies' The Terrifics are on the trail of the missing Tom Strong in the dark multiverse and in need of escape. That is until the ground they stand on turns out to be monstrously alive. Hey, #2 is by Reis and Lemire - like you wouldn't?

What're you eyeing up most from DC next March?
Posted by IADW at 10:28 pm