"The arrow hasn't been shot in five thousand years. Men won't know what it means."

It's odd to stand in a crowded foyer and be the only person not buying a ticket to Star Wars: The Last Jedi, however, today that was me. My ticket was to Justice League - for the third time. It is the JLA on the BIG screen AND the rebirth of a truly inspirational Superman (Henry Cavill).

Being the last reviewer on the planet to post their thoughts (and perhaps even the last on infinite earths), I know the split this film has caused. A large portion of this comes from the lost scenes hinted at in trailers released prior to the movie being edited down.

From the first poster of Jason Momoa as Aquaman, the words 'Unite the Seven' heralded the arrival of Green Lantern and the return of Superman, who alongside Wonder Woman (Gal Gadot), Batman (Ben Affleck), Flash (Ezra Miller), Cyborg (Ray Fisher) and Aquaman complete DC's new 'Big 7'. 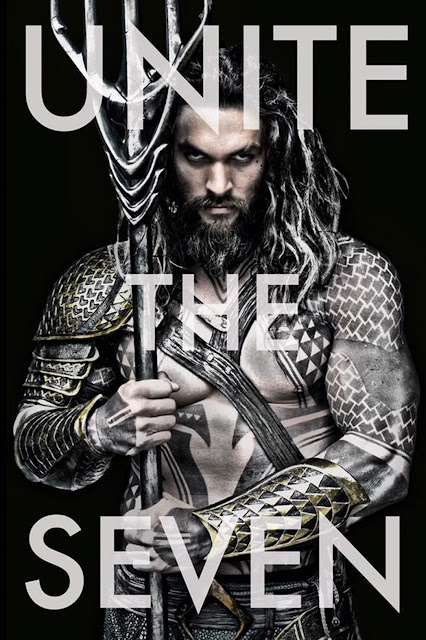 While a brighter Superman does return in Justice League, Green Lantern's edited absence costs the plot a much-needed layer of scope that really would've made Steppenwolf (Ciarán Hinds) seem like a job for the World's Greatest Heroes and not less of a threat than Doomsday or Aries were in previous DC films.

The Parademon attraction to fear remains un-counterbalanced by GL willpower and their leader's second attempt to unite the scattered Motherboxes oddly doesn't warrant the attention of the Green Lantern Corps, unlike centuries earlier, when the Corps assisted in his initial defeat.

Trying to ignore these lost moments, I bought ticket #2. This time I saw an action-packed hit, one that's given me a new JL trinity.

WONDER WOMAN: From seeing her first battle with Steppenwolf to her staring down terrorists by saying "I'm a believer", Gal as Wonder Woman remains one of the ultimate actor/character combinations in the history of film. The heart and fierceness she brings to Diana continues to steal scenes here, highlighting why Batman pushes her to assume leadership of the league.

AQUAMAN: I've always viewed the guy 'who talks to fish' as an amphibious tank and Justice League drives that vision home with all the force of a nailgun.

SUPERMAN: The original super-hero doesn't just return in mind and body, but soul as well.

When Kal-El encounters Steppenwolf, truth and justice come first. He's an inspiration who laughs. He's a son and a husband who finds peace and perspective standing in his mum's cornfield. He operates alongside Cyborg and The Flash for what he could do alone. Heck, filmmakers even remember my favourite 'Super-power' - his freeze breath!

This is Superman and this is a DC in touch with its comic-book roots. Sure, Justice League is a apokoliptian time-spanning epic without a hint of Vandal Savage or Darkseid, but Lois's monolouge at the end is on point when it says that people who hope now have a reason to look to the sky once more. Myself included.