MI5 MAKES MY 2018: Ninjak vs The Valiant Universe 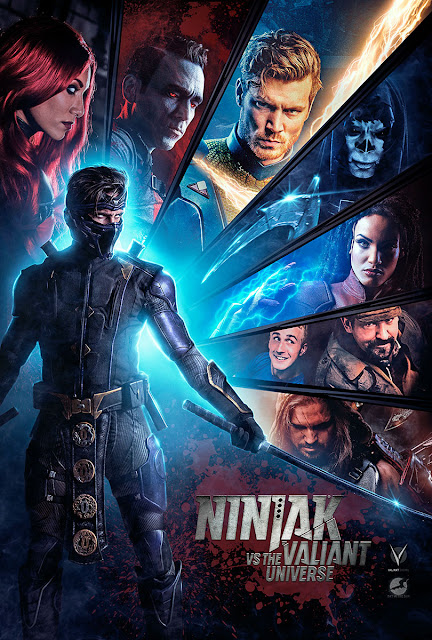 Sure, a lot has been written about upcoming movies like The Avengers: Infinity War, Black Panther and Aquaman, but nowhere near enough is being written about what I'm betting will be one of the biggest hits of the year; the live-action series from Bat in the Sun Productions: Ninjak vs The Valiant Universe.

Just look at this variant cover to the January #1 comic of the same name! The detail the team have gone to in bringing Valiant's top icons to life gives me chills.

While the team have made the X-O Manowar blue and gold battle armour look camera-friendly (a challenge even the X-Men films shied away from), other preview art also shows Derek Theler as Aric in his barbarian style gears, still with the weapon that will redefine 'power sword' (sorry He-Man)!

With Kevin Porter as Armstrong, Jason David Frank as Bloodshot, Alex Megli as Archer, Chantelle Barry as Roku and more, there still lies plenty of room for a sequel, with Quantum and Woody, Rai, and Punk Mambo, along with Faith, Torque and the rest of the Harbingers - you know, should the MI5's best ninja-weapon live...

Can't wait, but want a taste of Bat In The Sun goodness? Check out Ninjak vs TVU director, Aaron Schoenke as The Joker taking on The Walking Dead's Neegan, in this live-action beat down. It's one of the best Clown Prince of Crime's out there - and that's saying something!