When we Kiwis find something we like, we say it's 'Sweet as'. When I look at Marvel Comics' March 2018 solicits, these five make the 'Sweet As' grade:

ONE) Why would you stick a Thor or a S.H.I.E.L.D. variant on Daredevil #600? Putting that numbnuts move aside, Hornhead’s own milestone promises a conclusion to the Mayor Fisk storyline, Frank Miller and Alex Ross covers, a slew of street-level heroes, and the obligatory surprise ending that all good anniversary issues should have! 56 pgs. 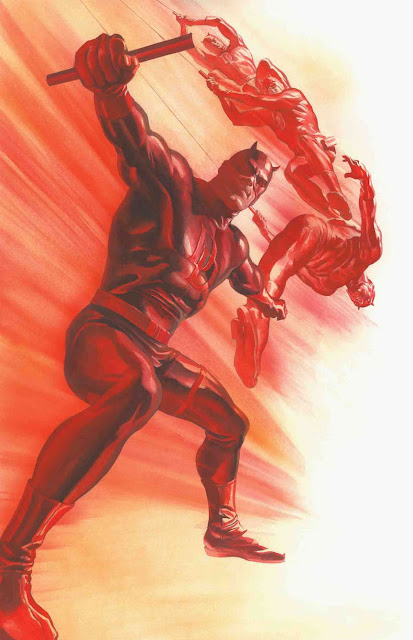 2) Just a few posts ago I was re-re-re-re-re-stating my love for the original Ghost Rider, and in March he gets his own one-shot tie-in for Doctor Strange's 2018 mega-event! Better yet, Damnation: Johnny Blaze Ghost Rider #1 sees the rider take on Mephisto himself, all under a sweet Clayton Crain cover!

3) Have writer Dan Slott and the Green Goblin been seen in the same place? Just because the ol’ pumpkin bomb throwing madman is at his scariest and back for Slott’s LAST Spidey-story Go Down Swinging in March issues of Amazing Spider-Man. Plus there's a Red Goblin. Red is what Blood was in the 90’s. Red Hulk, Red Lantern, Red Robin, Red Arrow... chuck red in your name and watch your popularity soar!

4) The Winter Soldier gate-crashes into Wakanda in Rise of the Black-Panther #3, meaning my dream of a Mission Impossible type book of all the X-Force-ish Avengers; Winter Soldier, Hawkeye, Black Knight, Black Widow, Black Panther etc, is another step closer to reality!

5) Speaking of 'Earth's Mightiest', one of my favourite issues saw Jarvis fight Inferno, reuniting the disbanded team in the process. In March’s Avengers #683, part of the weekly No Surrender arc, Beast ventures into the butler’s mind, only to be stunned by the secrets festering inside.

What are you looking forward to from Marvel in March?
Posted by IADW at 2:00 pm