When we Kiwis find something we like, we say it's 'Sweet as'. When I look at all the April 2018 solicitations for publishers outside the 'Big Two', these five comics make the 'Sweet As' grade:

Brian Wood has revamped Spawn, turned heads with DMZ and now launches ROBOCOP: CITIZENS ARREST #1 for BOOM! Studios in April, along with artist Jorge Coelho! Corporations have taken over. Justice is crowdsourced and all citizens are encouraged—and rewarded—to spy on their neighbours. The only authority on the streets? Robocop.

NINJA-K #6 "The Coalition" -- Part One! Now this is a team! In the face of hunting a defective agent, Ninjak finds The Ninja Programme's own former sensei, the Jonin, has assembled a team that includes the Dying One, Kostiy the Deathless, Linton March, and The United's Ultimo -- so he decides to create one of his own. Enter Livewire, the underused Punk Mambo, Dr. Mirage, and the massive GIN-GR! Now there's a team line-up I want to read! (Valiant) 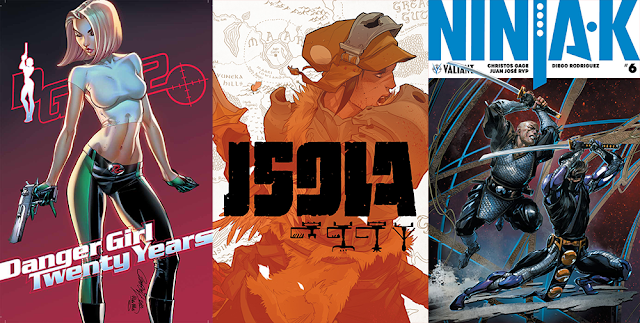 Outside of Tom King, Steve Orlando is a writer whose work I instantly flock to given the amazing job he did on Midnighter. In April, his latest series for Image Comics, CRUDE launches with a bone-crunching #1. Killers who once feared Piotr Petrovich, have just sent him his son—in a body bag. Piotr now journeys across Russia to learn what type of man his son really was, while hunting the bastards who killed him.

Folks who miss Wildstorm as a publisher can often forget the amazing imprints the label had when they are looking in the rear-vision mirror, Cliffhanger being one of them. Well, in April, IDW is offering J. SCOTT CAMPBELL'S DANGER GIRL: 20TH ANNIVERSARY special (feeling old yet?)! See the pencils of the preview story and the first issue of the iconic Cliffhanger title for the very first time, as well as the inked and coloured versions in one book. 88 pages.

Mega-talented artist Karl Kerschl gets to step into the world of creator-owned fantasy and awesomeness with ISOLA #1 from Image Comics in April. When the possessed captain of the Royal Guard flees with the Queen of Maar, Captain Rook’s only hope of saving the kingdom from impending war lies on the mythological Isola, land of the dead.
Posted by IADW at 9:25 pm