FACE-OFF: The Top 6 Bloodshot Artists Ever (Up Until Now)

Valiant's ultimate regenerating, nanite-powered weapon of mass destruction has had Hollywood in his gunsights for some time now, but that gun got fully locked and loaded this week with the word that Riddick himself, Vin Diesel was in early talks to play Raymond Garrison, and his plight to discover his real identity after the surgery that gave him 'life' at the hands of Project Rising Spirit.

To toast the idea that one of the highest-grossing actors could jump behind those infamous red eyes and chalk-white skin, here are The Top 6 Bloodshot Artists Ever (up until now) (click to enlarge all the images)!

6) NORM BREYFOGLE In hindsight Birthquake may have signalled the beginning of the end for the original Valiant line, but what a signal! Sears on X-O Manowar, Jurgens on Solar, and Norm himself on Bloodshot. This image alone shot to the heart - and still does (read my interview with Norm himself here).

5) DAVID BARON Click to enlarge the above, and amongst all that detail, check out Shot's face. Baron perfectly captures the soulless look of a machine-run man, while still giving a hint that somewhere inside Raymond is struggling to keep control.

4) J.G. JONES I never get why after 52 and Final Crisis, J.G. Jones seemingly disappeared from covering comics. His cover art always flies off shelves, and here with 'Shot and the H.A.R.D. Corps (think Valiant's Suicide Squad) it was no exception!

As for the top three artists, just click here and see... 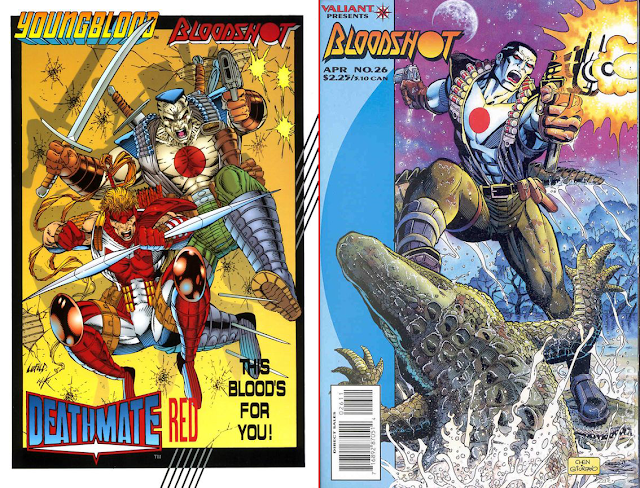 3) ROB LIEFELD Okay, so Deathmate may have done for 90's Image Comics what Birthquake did for Valiant, but this poster always makes me dream of what would have happened if Rob had joined the unified, more sci-fi/X-Force-ish universe of Valiant, over Image. Seeing him draw Bloodshot like this makes me want to see more! 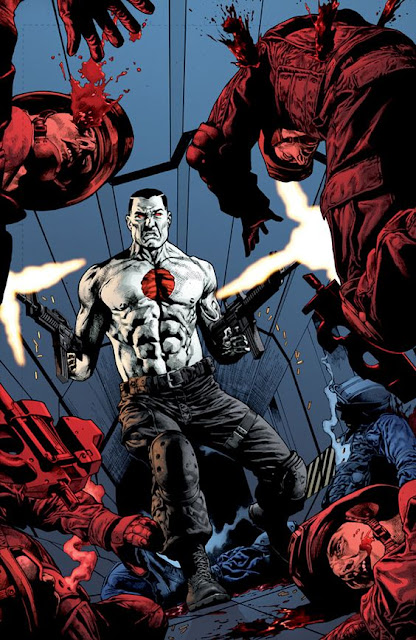 2) SEAN CHEN Clean lines, dynamic compositions, Sean Chen proved he was a rising star right here. Plus Bloodshot's kicking a croc in the jaw. You don't get tougher than that!

If Sony really wants to show Vin Diesel Bloodshot's potential, chances are he has already been handed a copy of Mico's jaw-dropping work on Bloodshot Reborn with writer, Jeff Lemire.

Mico's artwork was lightning in a bottle here, with insane yet easy-to-read detail, action, splash pages and guns. Boy were there guns.

In fact Mico's art was so stunning in this series, he not only become one of the industry's biggest stars overnight, you almost pictured Marvel and DC talent scouts parked outside his house, waiting to race each other with offers when his contract with Valiant actually expired.

Who is your favourite Bloodshot artist?