When we Kiwis find something we like, we say it's 'Sweet as'. When I look at all of Marvel Comics April 2018 solicitations, these five comics make the 'Sweet As' grade:

ONE) I wish Marvel would stop returning to old Marvel incrementally, and just do a big month event and get it over with. Blame it on Kang or someone. It's sad to read through the listings of the most famous comic brand on the planet, and the main thing that pauses your pulse is the latest range of True Believer $1 reprints, which in April, feature Thanos's key appearances. These include Infinity Gauntlet #1, Infinity War #1, and Rebirth of Thanos which represents Silver Surfer #34. 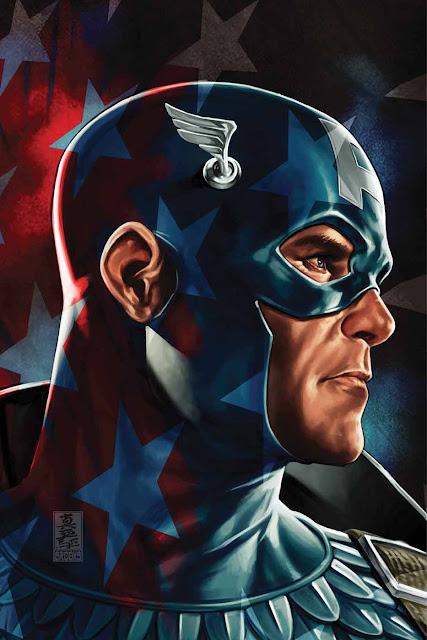 2) With Deadpool 2 about to make her a household name, there are no surprises that Domino falls into her own series in April. While I'm surprised the book has writer Gail Simone at the helm, over someone more Ed Brubaker-ish in terms of style, Grant Morrison once opened my eyes to this character's potential in the pages of New X-Men and Gail could easily do the same.

3) Frank Castle would never wear a suit of armour. His war against crime is an arsenal of guns, rope and everyman items - but stick him in armour and you loose that. In The Punisher #223 Frank's War Machine armour finally gets beaten down, and he has to go "old school" to survive. THAT is the Punisher.

4) Rebirth-ish storyline No Surrender concludes in Avengers #690 in April and promises that those left standing will step forward to usher in a new age. But who? Judging from that variant cover on the left, I'd say they have the first member right - or is it Cap's final farewell?

5) Two of the Fantastic Four's greatest foes stand seconds from destroying the multiverse and only The Thing and Human Torch stand between them and victory. So what else is new? The return of the Fantastic Four continues here in Marvel 2-In-One #5.
Posted by IADW at 11:34 pm