When we Kiwis find something we like, we say it's 'Sweet as'. When I look at all the solicitations for publishers outside the 'Big Two', these five comics make the 'Sweet As' grade:

Cyber Force #1 was my first Image comic. I just dug the visual of Stryker having multiple cyborg arms. In this latest relaunch, creator Marc Silvestri is providing a cover and overseeing the return of his cybernetically-enhanced mutants in March, in a new series by writers Matt Hawkins, Bryan Hill, and artist Atilio Rojo. Surviving a terrorist attack thanks to his employers, Morgan Stryker is set to pay with his humanity. (Image Comics – More details) 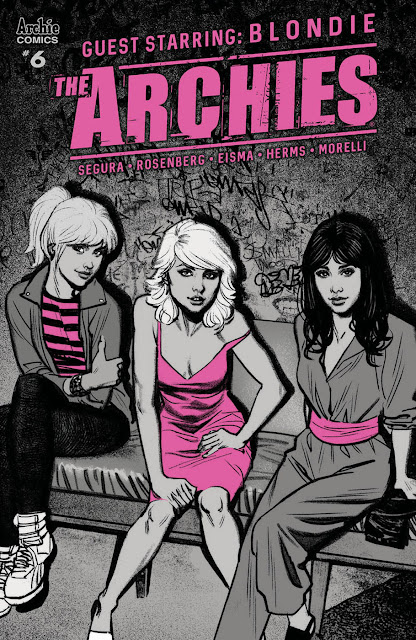 One of the most distinctive and powerful voices in music guest stars in The Archies #6 – BLONDIE! After the music legends finish producing The Archies first album, will the band say ‘Call Me’ or will they have a Heart of Glass? (Archie Comics – More details)

Quantum and Woody is always wall-to-wall fun. #4 of the current series even takes place in Australia, which is right next door to me! The world’s worst superhero team have found Woody's dad. Will Quantum handle a more inebriated version of his unpredictable partner? (Valiant Comics – More details)

Being an orphan without a sense of belonging is one thing, being  the latest in a line of men who are bound to a murderous voodoo spirit in order to become the latest Shadowman is another. But that is life for Jack Boniface. His March #1 sees Green Arrow: Year One writer, Andy Diggle turn up the horror dial as Jack confronts the demons of the real world while literally battling his own. (Valiant Comics – More details)

Shadowman and The Crow relaunching in the same month? Are we sure this isn’t Halloween? In The Crow: Memento Mori #1, David, the new Crow, seeks vengeance in Rome against the terrorists that murdered him and his girlfriend. (IDW / Edizioni BD – More details)