THERE CAN BE ONLY ONE: 'Flash War' To Set A New Record

The heroes of the neighbouring Keystone and Central cities better get their best running shoes on. 2018’s Flash War story arc launches in this month’s The Flash Annual #1 before motoring into issues #46-50 of the monthly Flash series. 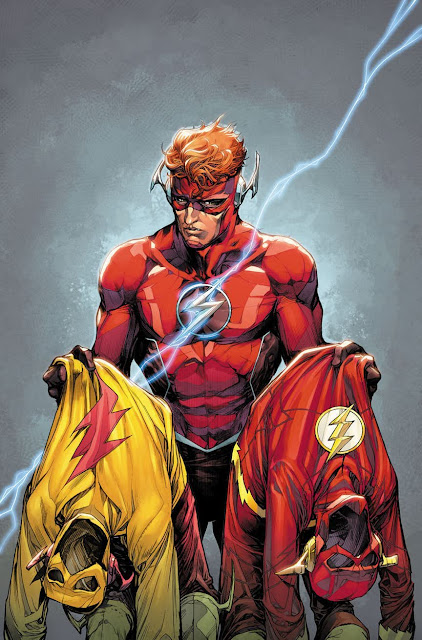 As this amazing cover by Howard Porter suggests, this story turns cosmic treadmill by deciding who will be DC’s ultimate Scarlet Speedster; Silver Age Flash; Barry Allen or former Kid Flash; Wally West, who grew into and held the mantle of The Flash after Barry's ultimate sacrifice - right up until Barry's rebirth in Infinite Crisis.

After DC relaunched its whole line with the DC52, Wally was nowhere to be seen, only Barry. Making a grand return with the DC Rebirth special, Wally warned Barry that their universe had been tampered with by unseen forces, and was missing something. On Jan 31, 2018, that 'something' multiplies.

The annual sees Wally turn to Barry for advice on whether he should let Iris West know he's alive. Only for Magenta, West’s magnetism-powered former flame to send out an S.O.S., which soon has Wally facing even more memories of his buried timeline and questions over where to run next.

Which Flash should be THE Flash is hard for me to call. Down from Batman, Barry Allen was THE hero that drew me to read DC Comics. I even wanted to be a forensic scientist right up until I was 15 due to his adventures.

Every time he ran across water or up the side of a building, my mind blew – and there’s still no greater detective duo in comics than Barry and Bruce Wayne. Unless you count original Robin, Dick Grayson / Nightwing and Wally.

While Barry founded the Justice League, Wally founded the team's revival JLA years. Wally became The Flash in ways few other legacy inheriting characters in comics have, and his focus on that responsibility made his stories stronger. The only characters that come close in living up to a legacy are Kyle Rayner/Hal Jordan from Alan Scott the original Green Lantern, and of course Barry Allen in taking over the run for justice from original Flash, Jay Garrick.

Barry has always been the TV and movie Flash, but in animation, Wally wins out. So, forget who's faster, Superman or Flash, Barry vs Wally is where the money's at in 2018. Ready to place your bets?