WHAT I MISS ABOUT 90'S COMICS: Advance Comics

These days, Previews is THE comic ordering catalogue, however, it still can't hold a torch (human or otherwise) to Advance Comics, the 90's catalogue from Capital City Distribution that was so much more than just that.

For this comic fan, living in a small, fairly comic-shop-free New Zealand town, Advance Comics was my doorway to the diversity of the comics' industry. Pre-internet, it featured the complete listings of the 'big two', but also those of the smallest indie press publishers, and those of up-and-coming hit-makers like Chaos!, Crusade, Malibu, Cartoon Books and hundreds more - every month.

The Infinity Crusade cover above left, was my first copy. Mum saw an ad to order comics by mail in an edition of the New Zealand TV Guide, and showed me. $10 in an envelope later, a comic shop in the city was sending Advance Comics my way. When that first copy arrived, Mum met me at my school's gates and while my feet walked home, my blown-mind frantically flicked through its pages, trying to figure out which comics were going to be mine. 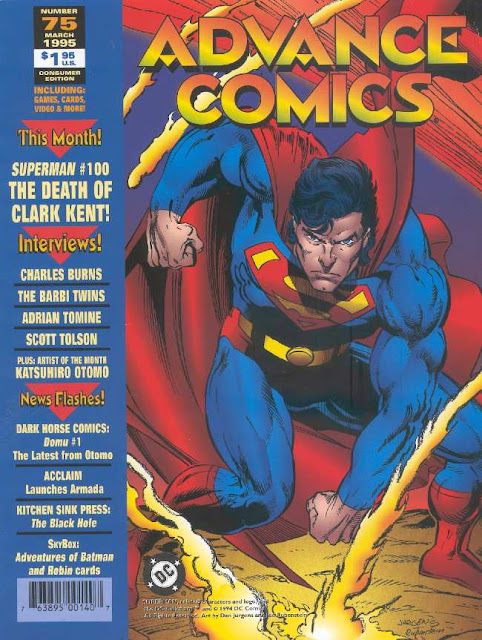 Advance Comics also featured complete release lists for pop-culture-based apparel, trading cards, video (yes, VHS had its own section - this was the 90's) and media.

Content was separated by 'Hot Flash' items worthy of extra attention and 'Hit Picks To Click' - the can't miss items of the month. It was a buzz having your comic collecting prowess backed by having a release you were waiting on gain one of these spots - let alone one of the issues two flip-book covers (look above - Night Thrasher)!

Then there were the freebie trading cards and promo material, as well as the creator interviews.

While the decade drowned in fan publications like Wizard: The Guide To Comics and Hero Illustrated, Advance Comics gave you more bang for your buck talking with Billy Tucci about Shi or Dan Jurgens about The Death of Clark Kent right in the catalogue itself. Some of the best interviews I've read happened right here.

Sadly, the era of Advance Comics started to come to a close as Marvel made its own moves to distribute their comics independently. My issues are in a box in the wardrobe, and I continuously pull them out to read, or just get re-amazed at the full-page ads and the industry that once was. And that's the true test of how good this 'catalogue' was - it's still one of my go-to resources over 20 years on.