GREAT KRYPTON! Why I'm Excited for The Superman Takeover of Brian Michael Bendis

Krypton exploded this week when all-star DC signing and former Marvel maestro, writer Brian Michael Bendis announced he will be taking over both of DC's Superman books post the landmark Action Comics #1,000, creating new characters and a new status quo for not just the cast of The Daily Bugle, but Metropolis itself.

As a guy whose personal email address has been thedanofsteel@... since I was 13, any big Superman changes ricochet around my brain like a speeding bullet. That said, here's why I think Brian is not only the right man for Lois but the one to ensure the super-titles leap even taller buildings than ever before.

1) The Daily Bugle The world's most famous fictional media will undoubtedly become a proper home to investigative journalism under Brian's pen. As a guy who works with media by day, it always gets me when The Daily Planet is treated as a mere romantic backdrop rather than a source of plots, drama and contemporary stories.

The classic Fleischer Superman cartoons of the 40's are my definitive Superman adventures (if you haven't watched them, most are now on YouTube). Heavily based on what role the freedom and reporting of the press played in wartime America, there is no doubt that the role of the press in today's society would be equally as addictive.

In doing so, a revitalised Planet would also finally, and truly define Lois Lane as a reporter and not an appendage. Gotham Central was an award-winning series set on the cast of Gotham's police department. Lois could show Commissioner Gordon what a Pulitzer means and how modern justice amongst the greys of truth can be still be found, especially when it evades conventional channels.

2) A Runaway Locomotive. Right from the start, Brian says two of the "huge bombs" he has planned will drop in the ten-page story he is doing with artist Jim Lee, within Action Comics #1,000. Then before his monthly run continues, he will dovetail into a weekly six-issue miniseries titled Man Of Steel launching May 30, which promises to not reboot the super-verse, but deliver in its final issue the biggest super-changes since Crisis on Infinite Earths.

3) José Luis García-López
José is DC's Jack Kirby - it's his artistic take on their library of characters that will eternally define how many fans see their heroes, and as you can see in the banner to this story, no character is as defined by his work than Superman.

From making the spit curl on his forehead work to the way he always drew the cape as if it was a character in itself, José made Superman look like a hero who enjoyed being a super-hero. There were no grimaces. In the first Christopher Reeve Superman movie, Kal-el saves a cat from a tree, defining Superman as the hero who helped those in need - regardless of scale. If it was a crisis to you, it was a crisis to him, and José's Superman gives that feeling. The artist will come out of semi-retirement to work with Brian on a key short story in DC Nation #0 on May 2nd. 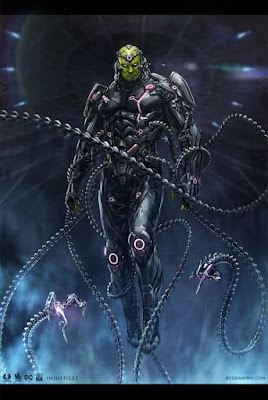 Bendis's mandate on Kal-El to bring in new threats, support cast, heroes and foes will soon restore power to the bright lights of this gallery and put new pieces on the wall, including with a new major foe with ties to Kal's origins. From there the wickedness looks set to spill over into both the epic-focussed Superman title (relaunched from #1 July 11th) and the more Metropolis-defining Action Comics, which continues with #1,001 on July 25th and reaches skyward.

5) An Act of Creation. Not only have DC given Brian a license to let his imagination run rampant through the streets of Metropolis, the Bottled City of Kandor and whatever other DC locations he wishes to touch on or revisit, they are also giving him space to flex his indie comic muscles, backed by the full might of the DC marketing machine.

This partnership will hopefully encourage more fresh ideas into at least one of the big two publishers, and stop creators feeling like they are taking up time on legends for rent, rather than productively contributing to those legends' expansion. Brian, as part of his deal, gets to move all his previous and future creator-owned material such as Powers and Scarlet to DC, and create his own Young Animal/Marvel Knights-ish imprint, offering his vision of new and established DC Characters (fingers crossed here for Dial 'H' For Hero). Good stuff DC!