When we Kiwis find something we like, we say it's 'Sweet as'. When I look at all of Marvel Comics May 2018 solicitations, these five comics make the 'Sweet As' grade:

ONE) May is meant to be the launch of Marvel's "Fresh Start" initiative, however, all the relaunched titles announced for May already feel like a continuation of the same things currently threatening to condemn the former House of Ideas, except for Black Panther #1. While the African super-hero, T'Challa will always be a grassroots warrior to me, the idea that he is about to discover a galactic empire founded in his name, really opens up the door for some cosmic ideas - just don't tell Vader! 40 pages. 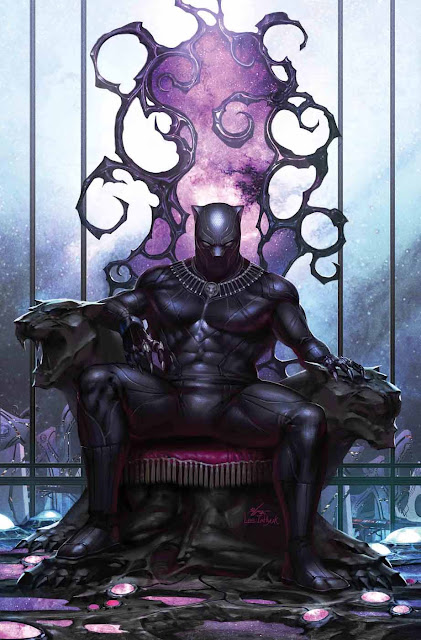 2) Darkhawk is back! As THE title I collected in the 90's, seeing Darkhawk back in action automatically opens my wallet. Hopefully before this miniseries Infinity Countdown: Darkhawk
concludes, NYPD officer, Chris Powell's war with the alien army of the Fraternity of Raptors will see plenty of old faces like Lodestone, Savage Steel and Portal return too!

3) Invincible Iron Man #600 will be writer Brian Michael Bendis's last work for Marvel, before bolting for DC, and like when he left Daredevil, he (and an all-star team of artists) are throwing down a challenge for the incoming team to take up and get out of - launching a brand new major villain! Who will be Iron Man when the dust clears? 56 pages.

4) The final fate of the Fantastic Four is revealed as the mini-series, Marvel 2-In-One comes to a close. Boy, this Jim Cheung-drawn series has been great - especially in getting The thing to sound like him old self again. The answer will probably be spoiled online first, but still pick this issue up for prosperity. It'll be worth it.

5) Ever since Superman had Bizzaro, super-heroes have needed their evil counterpart. Domino, X-Force's ultimate soldier of fortune, gets hers in #2 in May from writer, Gail Simone.
Posted by IADW at 4:26 pm