When we Kiwis find something we like, we say it's 'Sweet as'. When I look at all of DC Comics November 2018 solicitations, these five picks make the 'Sweet As' grade:

ONE) Writer Grant Morrison and DC Comics go together like peanut butter and jam, in fact they are better than PB&Js - even if you cut the crusts off. By giving his wild imagination, the hero whose weaponised ring pretty much turns imagination into reality, THE GREEN LANTERN #1 is a bonafide 'must read'. Intergalactic conspiracies, traitors, and the cosmic police force that is the Green Lantern Corps. 'Nuff said! 40 pages. 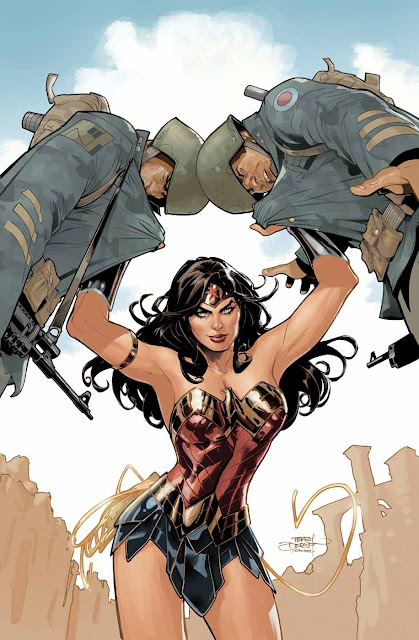 2) GL isn't the only icon getting a makeover at DC in November! Writer G. Willow Wilson and artist Cary Nord, start The Just War in WONDER WOMAN #58, where Ares breaks free of his prison beneath Themyscira, only to seem a new and improved 'God of War'. Myth, monsters, Terry Dodson covers and Grail - sounds like a classic run in the making.

3) Right now, the comic I'm racing to open every month isn't Superman, Justice League or Captain America - it's HAWKMAN. I can't describe how well writer  Robert Venditti and artist Bryan Hitch are working the Winged Wonder and combining all his identities across time and space. Look for more origin work to amaze in November's #6 - and The Atom!

4) Jason Blood, Spectre, Deadman... it always surprises me when people describe the DCU as "golden". Its supernatural arm is as rich as the cast of the Justice Society, and this book is set to prove it, with Lee Bermejo on pencils and Brian Azzarello at the keyboard. Oh yeah, Harley Quinn is on the cover to BATMAN: DAMNED #2 too, so I guess she's in here as well. You know, if you're a Harley fan... 48 pages.

5) I get into a crisis every time I have to choose a fighter on Mortal Kombat, but I have a low crisis threshold I'm told. In HEROES IN CRISIS #3 it's murder suspect Booster Gold vs Superman - and the match isn't as one-panel-of-heat-vision as you'd think. Secrets not yet spoiled by the net, Batman, Flash and more all cram into this Tom King written hottie, with Clay Mann doing art.
Posted by IADW at 9:38 pm