THE TOP 12 OTHER SUPER-HERO TEAMS IN COMICS: 8 - The Outsiders

Sure, the world knows the X-Men, Justice League and the Fantastic Four etc, but what about their distinguished competition? That's why I'm counting down the Top 12 'Other' Super-Hero Teams - today, #8, Batman's own black ops crew; THE OUTSIDERS!

WHY THEY'RE COOL: In the main comic universes, I hate that most new heroes aspire to join the golden ranks of The Avengers or Justice League. Who the hell wants to fit in? Who wants fame? Talk about your poison chalice. What happened to heroes who just want to do the job? The likes of Manhunter, who don't care about club benefits or rep, as long as right wins over injustice - even when the methods needed skirt around justice and the law. 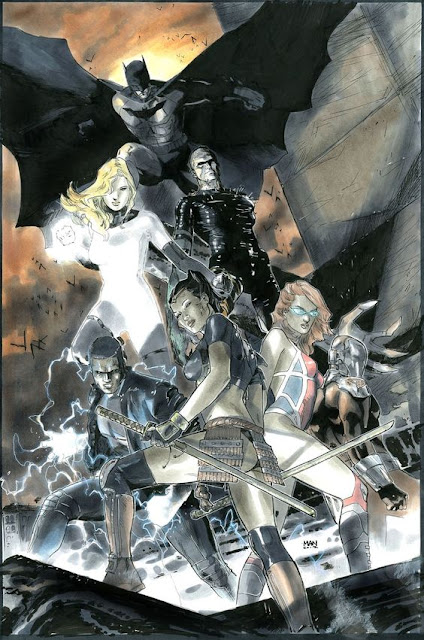 The Outsiders, that's who.

That's where Batman works, and its a method he knows works. By selecting others who also seek right not the spotlight, he, Metamorpho and more, can take that approach to the back allies, shadow organisations and riots of the world. Behind the backs of the JLA and Bat-Family, where it's cool and get hits done.

The best part about The Outsiders is all the potential the team could have, reborn in today's world of #false news, shady governments, humanitarian aid and human rights agendas/atrocities. For the team created in the 80's, their time has finally come. Katana never suited being in the Suicide Squad anyway...

STAR PLAYER: Sure Bats is cool and all, just for my money, the guy that really energises the team is Black Lightning. His bromance with Geo-Force lit up the book more than Halo, and his street-smart attitude cut through the pages slicker than Katana. Plus he had an afro and rocked a costume that never should've been replaced. Every General needs a great right-hand - if anyone's going to be that for Bats aside from Nightwing it better be Jefferson Pierce.

RECOMMENDED READING: Anything with Jim Aparo on the creative team is always worth your dosh, especially the crossover over with The New Teen Titans (Outsiders #5 / NTT #37), and Batman and The Outsiders #13, where the team discover the secret identity of their Dark Knight Detective leader, in the most unique way I've ever read... one that goes right back to the Caped Crusader's origins.
Posted by IADW at 9:34 pm