THE YEAR'S GREATEST: My 2019 Justice League

One of my earliest comic book 'wow' moments, was being introduced to the Justice League in Super Powers #3.

I only knew about four of the characters involved, but the idea Flash knew Batman and Superman, and they hung out in a satellite above the Earth, was one of the coolest concepts I had read. In a nod to that memory, I want my first post each year to be my dream team, should I be given the keys to the car and told to write THE primer for comics' original universe. In 2019, this is my Justice League:

1) AQUAMAN When you represent a third of the planet, your place in earth's premier threat response team is guaranteed. Staple member Aquaman, is an amphibious tank with an army literally at his command.

2) BLACK CANARY Dinah should've been one of the League's founding members. As one of DC's most unsung heroes and top fighters, here, she puts her ties to the Justice Society into action as leader, making the hard calls Superman can't.

3) DAWNSTAR For the League to be truly future-focused, it needs a member from the 31st century's Legion of Super-Heroes. Dawnstar's cosmic tracking skills will fill the void left by Batman, as the crew's new 'wonder woman'. 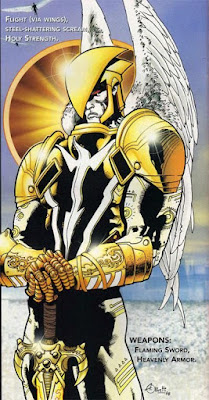 4) STEEL What’s a league without a red-caped dude wearing the ’S’? Steel proved his mettle in the JLA once, but oddly, has rarely been back. He’s the self-made, streetwise tech guy, whose phone-a-friend is the most powerful man on the planet - like, you don’t want that on your team?

5) KILOWOG When you're fighting intergalactic threats, having an officer of universal police force, the Green Lantern Corps on board isn’t a nice to have, its a given. Ballbusting drill Sargent, Kilowog will ensure there’s no weak link in the chain, with the muscle to back it up should the ring breakdown.

6) DIAL H FOR H.E.R.O. As the reader's point of view character, the H.E.R.O. Dial gives the League the ability to offer a different standout 'everyday' humanitarian, the ability to temporarily graduate into the League on each mission and help save the day, guided by living legends like Aquaman.

7) ZAURIEL Hawkman and Hawkwoman taking flight is a classic JLA visual. With Zauriel and Dawnstar on the team, we give that iconic sight a whole new twist; a new pair of winged wonders - with one an actual angel of Heaven. In terms of bringing status to the team, Zauriel is as high as it gets.

Plus, I love the idea of an 'angel' who can’t die, constantly giving his life for Earth, doing the tasks that cost a price others can't pay.