THAT CRUSADE SPIRIT: All-New Shi Kickstarter to Launch in April

Wolverine? Pifft! If I could've squeezed any comic into my monthly pull-list in the 90's, it would've been Shi.

After reading an Advance Comics interview with creator Billy Tucci, I became an instant fan. As a teen who was writing and drawing my own stories at the time, I loved the idea of this one guy, who had hit upon a Japanese cultural/spiritual gang story so strong, he was backing himself and publishing it on his own - when he could've easily had it swallowed up by one of the BIG publishers, especially when it became a runaway success.

Tucci was as much one man beating the mob as his title character, Ana Ishikawa was against the  Yakuza - and as an artist, his artwork was beautifully clear, dynamic and graceful. 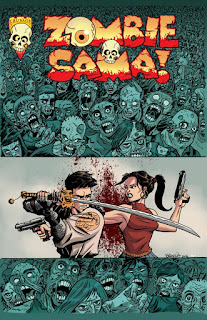 Now Shi's coming back. Tucci has told Newsarama that Shi - Return of the Warrior will start its crowdfunding Kickstarter in April, with Ana now a single mother to unsuspecting Hotaru, when her past "horrifically" returns.

Unlike the 90's, I won't be missing this story, which is set to prove that comic characters other than Dick Grayson, can actually move on and up.

A free ashcan of Shi's return is available via the current Kickstarter for Tucci and John Broglia's 60 page Zombie-Sama!, which reached its initial target in just over one a day.

Telling the tale of sushi delivery boy Jim Okami, who is also ignored by the new "in crowd" (invading nuclear-contaminated zombies) taking up katana in 2019, Tucci seems to have found the first two hits with which to start his biggest Crusade yet.
Posted by IADW at 3:00 pm