I was gutted to miss the 80th anniversary special of Robin. Since then, I’ve got all of the 80th’s of my fav DC icons, which is lucky as the Catwoman 100-pager single-handedly revived my faith in the quality of one-shot specials.
This August, Aquaman jumps into the 80th-anniversary frying pan, thanks to writers such as the legendary Dan Jurgens, Geoff Johns and Francis Manapul, as well as artists Pop Mhan, Evan 'Doc' Shaner, Steve Epting and more (boy, I hope a Tempest poster from Phil Jimenez is included somewhere). 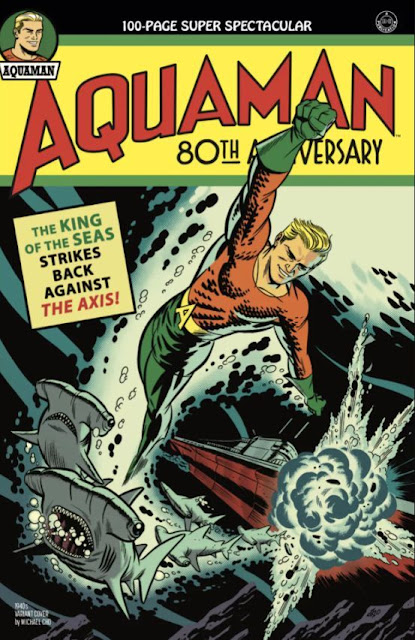 As is tradition with these DC 80th deep dives through the featured character's history, variant covers of each generation’s take on the King of the Seven Seas see even more graphic folk involved, from Michael Cho and Ivan Reis to Kevin Nowlan and the DC ‘Jack Kirby’ José Luis García-López.

García-López first defined 'my Aquaman' in the 80’s, however it was three 90’s remakes I hope to see reflected in the depths of Arthur Curry’s 80th-anniversary shin-dig, that made me an Aqua-fanatic.

From Bryan Hitch to Jim Calafiore, hook-handed Aquaman will always be the one that got away for me. Luckily my favourite Aquaman ‘look’ has at least got one of the variants mentioned above, so that’s one box ticked.

The other two takes with heaps of seascape still to explore are the amazing sword and sorcery Aquaman: Sword of Atlantis revamp done by writer Kurt Busiek and artist Jackson Butch Guice, and Sub Diego, where writer Will Pfeifer and my favourite Aqua-artist of any era, Patrick Gleason, crafted social chaos as a newly submerged San Diego reeled in countless deaths and the new frontier for survivors able to adapt to life beneath the waves (with timeless covers by the ever-amazing Alan Davis).

As I get older, I realise that any character's continuity simply becomes more how your mind knits their best reads together rather than any official timeline. That said, the timelessness of these 80th-anniversary specials is what really makes for their success. The amphibious tank of the Justice League, the latest to showcase that fact when his splashes down this August.
Posted by IADW at 8:16 pm