THE TOP 12 OTHER SUPER-HERO TEAMS IN COMICS: 7 - Seven Soldiers of Victory

Sure, the world knows Rick's Walking Dead survivors, X-Men, Green Lantern Corps and the Titans, but what about comics' other awesome assemblages? Let's check in on another underdog crew who deserve a bigger slice of the pie.
Today, it's the team that's been around since DC's earliest days, with a membership whose history includes Green Arrow, Deadman, Batgirl, and Frankenstein himself - the Seven Soldiers of Victory! 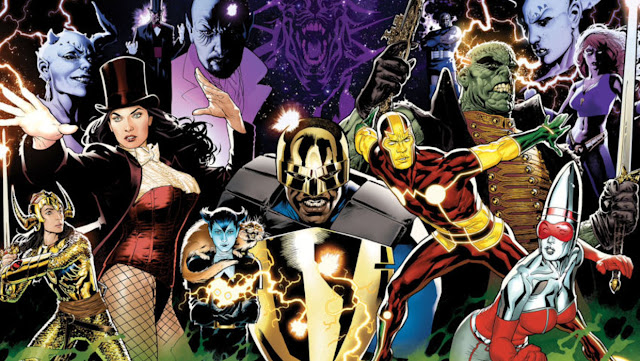 WHY THEY'RE COOL: The Seven Soldiers work best when the line-up nods to the magic of the original - seven heroes that within them tie to different eras of history as well as pulp culture. Just look - a Knight of Camelot, the Robin Hood likes of Green Arrow, and a cowboy avenger - all standing ready to take on the odds both incredible and fantastic. 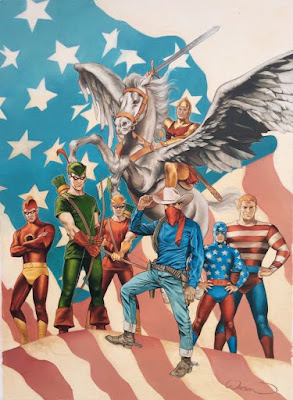 Right from the start, this group never saught to be the idols of millions. They were, it seems, a blatant lure by DC to attract fans of different mediums into the new world of superheroes, they created with the arrival of Superman. And it worked.

Not every hero faces persecution like the X-Men or aspires to be the world's premier response to all threats foreign and domestic like the Justice League. Some just want to get the job done - the Seven Soldiers of Victory.

STAR PLAYER: While I've never met a character riding a pegasus I never loved, the Atomic Knight has to do a sidestep, in light of the fact Seven Soldiers gave DC the title of 'Best Frankenstein in Comics'. A character revamp sorely missed in his own title, within the publisher's current crop of offerings.

No other character can face down Darkseid's Anti-Life equation, due to already being dead, then find his former bride competing to outshine him within S.H.A.D.E. - the monstrous Super Human Advanced Defense Executive.
RECOMMENDED READING: Writer Grant Morisson's Seven Soldiers comics' event is a beautiful thing. Across two bookend issues and seven mini-series (one for each character), he and a team of superstar-in-the-making artists dusted off and polished characters DC were struggling to know what to do with.

The line-up formula of across genres and time, now also included magic and the future. This saw Seven Soldiers remaster the term 'misunderstood loners', to have Frankenstein, Manhattan Guardian, Bulleteer, Klarion, Mister Miracle, Shining Knight and Zatanna save a planet (and fanbase) that all too often passed them over. Epic stuff.
Posted by IADW at 7:42 pm